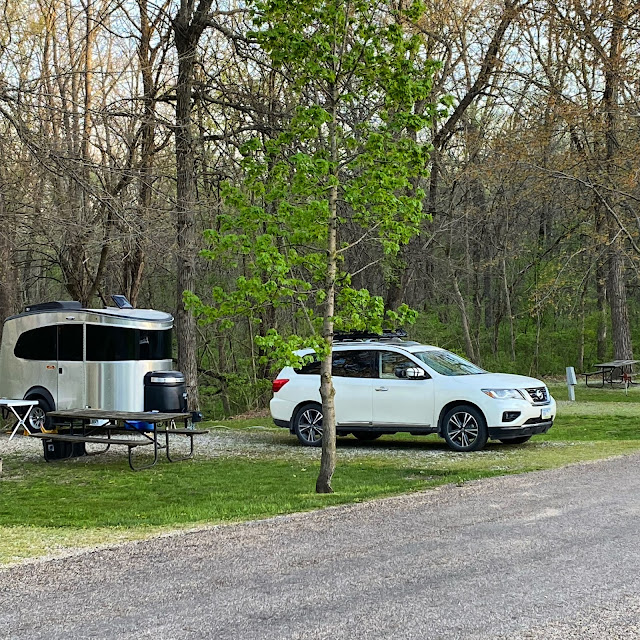 I remember the first time I towed a tiny trailer, my first trailer, a Rustic Trails Teardrop Camper Polar Bear. I had been practicing for a week the process of hooking up, driving around the block at home, and then backing into the driveway--two times a morning with left and right back-ins. After a week, I felt ready to take off across town to a county park four miles from home, where I successfully backed into a space and stayed three nights. The reasons my wife and my first trailer was a tiny "standy" I explained in the first post ever for this blog ("Why Such a Tiny Trailer?"), a little over three years ago. I'm glad to report that our move from "tiny" to "little" travel trailer by purchasing an Airstream Basecamp has not changed our overall camping experience much--some, but not much.
I listed in that first blog article four reasons why my wife and I had bought a tiny camper: 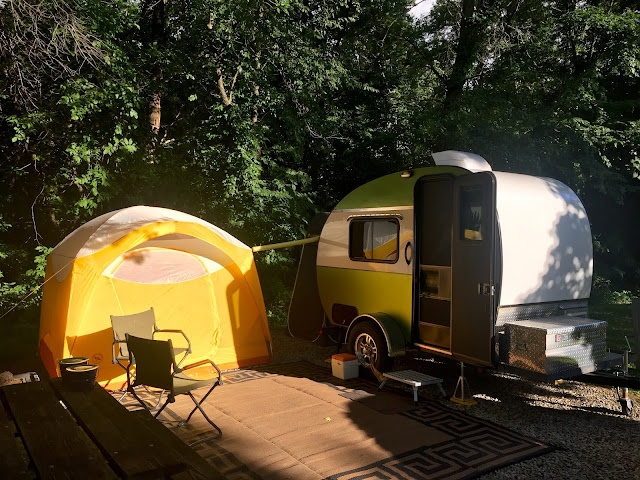 The transition from a tiny to a little camper, surprisingly, doesn't really affect the first three reasons. The Basecamp, at sixteen feet, is still close to the RTTC in size, and we still fit into smaller campsites that the bigger rigs avoid. We pull the Basecamp with the same tow vehicle we used for the RTTC Polar Bear. The greater weight is noticeable but not significant, as the width-of-trailer increase from five feet to six and a half is not that much. I've added inexpensive mirror extensions to my Nissan Pathfinder's stock mirrors, which also is not a vital addition but does provide more of a view behind the trailer. In terms of backing, after three camping seasons of backing the tiny trailer, backing the Basecamp offers no greater challenges. In terms of these three points, the transition has been seamless.
The fourth concept of living mostly outside is still relevant with our little Basecamp, yet I have found the increased space inside and the amenities of kitchen and bath have made a difference as we've transitioned to the new trailer.
I suppose the most difficult or time-consuming aspect of this transition has been understanding and dealing with the greater complexity of the Basecamp's options: heating system, water system, sewage system, refrigerator, solar option, propane tanks, and winterizing and de-winterizing. That's quite a bit of new! The Airstream owners' manuals have helped, and another big help has been online Basecamp social groups, where I can ask questions. I slowly learning, though, and applying what I've learned. I suppose it shouldn't surprise me that greater amenities includes more maintenance. With our first trailer, the Green Goddess, there wasn't much more than plugging in a 20-amp extension cord. Gone are those simple days, but also having many built-in services in the Airstream trailer means there is less to set up.
Transitioning to a little travel trailer from a tiny trailer has been easy. Gas mileage has dropped about half a mile per gallon, although the drop would probably have been greater if I lived in a mountainous state rather than hilly Iowa. Mostly, the greater inside living space has provided just that--a living space rather than a sleeping space. Even with the RTTC standy, the inside space was most conveniently a sleeping space. (Note: RTTC now makes the Polar Bear standy only in special, pre-sold batches because their smaller models are more popular.) We still get outside beneath the awning or in our Clam shelter for work or excessive rain, but the inside of the Basecamp is a liveable space, feeling like a mansion after three seasons in our tiny trailer . . . and this is not a slam on our little Green Goddess. It did what it was built to do, and it did it well. It was easy to transition to the slightly larger living space, though, yet still have a small trailer, only sixteen and a half feet from hitch to bumper.
For two people, our Basecamp's larger footprint makes living easier. There's space to move around inside and to engage in life's routines. Especially for longer adventures, for us, moving from "tiny" to "little" was a positive move. We had great times during our three seasons in the Green Goddess, but now in the Basecamp, we'll be bumping elbows less and stretching out a bit more.
at September 27, 2021

Email ThisBlogThis!Share to TwitterShare to FacebookShare to Pinterest
Labels: Airstream Basecamp, Why a Tiny Trailer?