Why Such a Tiny Little Trailer? 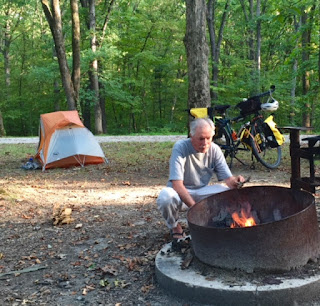 Before I answer why we bought such a little trailer, I should first let you know that it doesn't seem so tiny to me. Prior to buying the Green Goddess, I traveled and camped with my bicycle, so the change from fifty pounds of equipment packed on my bike to a 5 x 10 teardrop is an incredible change in terms of camping. I now have more space, more equipment, and more opportunities.

Most of all, though, I can now camp more with my wife. We've had some experience with camping in a tent the last two seasons. It's a beautiful tent, a Big Agnes Basecamp, a golden Taj Mahal of tents, and it provided a wonderful experience. Our experience out here in SE Iowa, though, was that too many camping days are eliminated due to extreme weather--too hot, too humid, too buggy, too cold, to wet . . . too something! Coupling these extremes with my wife's consulting work (which she can do while camping if there is phone/internet connectivity . . . and the environment is conducive), made tent camping too much a dice toss for us. Mornings were usually wonderful, cool and less buggy, but summer days too often became endurance experiences of braving the heat and humidity. This was bad enough for me relaxing around camp, but it was painful for my wife who was sitting at her computer working. This was not our dream of "let's get you out of the office." Out of the frying pan and into the fire! The photo of me cooking with an insect net over my head, well, I have one of my wife working at her computer, using the net also, and although her head wasn't attacked, her hands were. Not good.

We began considering a camp trailer but immediately realized from our tent camping that many campgrounds have tents . . . and then what we call "RV Row," where RVs are socked in side by side, due mostly to sewer connections. We wanted nothing to do with such close quarters; nature was removed from the experience. Such campgrounds were just transient mobile home parks.

We started looking at small camp trailers, and were surprised that the market actually starts at about sixteen feet. Then I ran across the owner of a teardrop trailer, a Rustic Trail Teardrop Campers Grizzly Bear model, and the rest is history. We are now owners of the Green Goddess, an RTTC Polar Bear.

Why we bought such a tiny camp trailer requires several answers:
My wife and I had read and researched quite a bit about the tiny house movement. We aren't planning on moving out of our 1,600 square-foot house, but we recognize the value of the concepts underpinning the tiny house movement: invest in time, not space; don't own so much stuff; and live in the world, not in a cubicle. (Henry David Thoreau speaks of this so eloquently in his essay "Economy.") For us, that resonance translated to buying a tiny camp trailer! Also, it's cute . . . that's the one word that repeatedly is used to describe the trailer. I think many people are overwhelmed (or underwhelmed) by the 30- 40-foot monster RVs that are pulled down the road and then parked on RV Row. The Green Goddess doesn't invade anyone's space. It only weighs 1,450 pounds empty and leaves a light footprint upon the earth, or lighter, anyway. 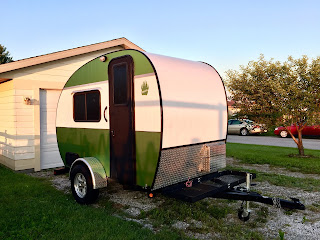 So that's why we bought the Green Goddess. Now Sandy and I can toast bread over the fire on those cool mornings, having enjoyed a good night's sleep in our bed. Setting up and breaking camp is easier, and our little safe haven/mobile office teardrop trailer is always waiting for another adventure.

I'm gathering reasons why other campers have bought tiny travel trailers. Stay tuned for that post in about a week. (Why Such a Tiny Trailer? Teardrop Owners Speak Out) 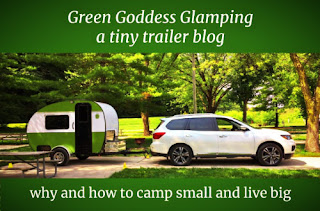 Email ThisBlogThis!Share to TwitterShare to FacebookShare to Pinterest
Labels: Why a Tiny Trailer?