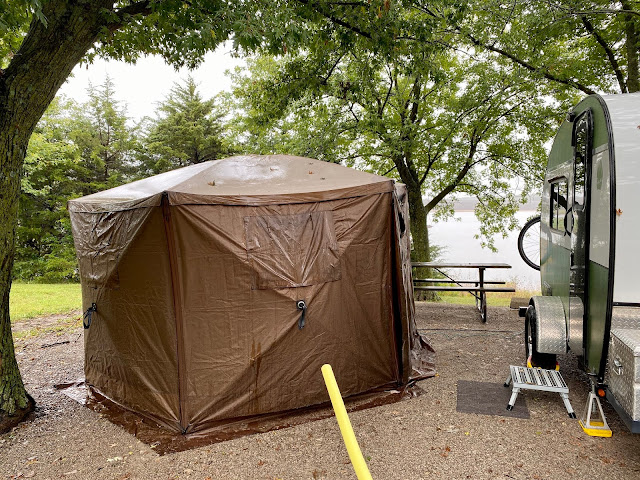 As I pulled away from home on a Tuesday morning, pulling my tiny trailer and all packed up for a two-week stay at Rathbun Lake in SE Iowa, I was fully aware that the weather forecast was for four straight days of rain. I was excited about the trip, though, and felt that the weather would help me secure a good first come, first served campsite at Buck Creek Campground, one of three Army Corps campgrounds on the lake. (There is also a state park campground.)

I was able to find my spot and set up camp prior to the rain hitting--including our Clam Quick Set 140 x 140 inch shelter. Then the rains came and never really left for the first four days of my fourteen-night "staycation" here at Buck Creek Campground. I knew it was going to rain because of the forecast, so you might ask, "Why endure the rain? Why not show up later?" The answer is twofold: 1) I felt I'd have a better choice of first come, first served sites on a Tuesday rather than a Friday, and 2) I needed some rest, so why not in my tiny camper beside the lake? I was right on both counts because I secured a great site and got some good rest.

My four rainy days of camping turned out well for me in part not just because of my easy-going manner but also because of the Clam Quick Set shelter that I used--with the wind/rain covers for the windows. I think that if I had been forced to do all my camp chores in the rain, the mist, or just in the wet between the rain spells, I would have had much less fun. Prior to this rainy stay at camp, my wife and I had primarily used the Clam for sun and bug protection. We're glad to know that with the wind panels, the shelter also works in the rain. This is not unplanned by the manufacturer, though. If you look in the photos, you can see that the shields attach with a flap folding over the top of the shield in order to keep the rain run-off on the outside of the shelter.

My wife and I have used a Quick Set shelter for two camping seasons, but I have to admit that we have bought two of the shelters. The first worked great, but at the beginning of our second camping season, I attempted to put it up without reviewing the company video guide . . . and mangled the process badly: upside down, backwards, and inside out--and if you can get a picture in your head of all those "umbrella" pull-outs upside down, backwards, and inside out, you have an idea of the dilemma I was in. I remember at one point my wife's son was helping me "put it back the way it was when we started." Nope, with all those push-outs pushed the wrong way and folded the wrong way, finally we gave up in despair. My wife suggested that we take the mess home, throw it away, and buy another because she likes doing her office work in the shelter.

I finally agreed, humbled and humiliated, but expressed one request: "What happened here today in the campground stays in the campground." I'm breaking our pact for the good of other campers. The Clam Quick Set is easy to put up and take down--if you follow the instructions. And the best way to learn is to watch the company's instruction video. It's clear and straightforward. With all those push-outs, though, don't think you'll just wing it and can always just back out of the process and start over. That would be like playing the game Pick Up Sticks and at some point of disagreement saying, "Well, let's just put them all back the way they were when we started."

Following the instructions for putting up the shelter, it was easy to do alone. I erected the shelter, staked and tied it down, and added the wind/rain shields. I was ready for the storm. One hint I was given by another Clam owner was to tie down the Clam using the metal eyes on the frame, rather than the sewn-in tiedown eyes on the fabric. The metal eyes are part of the frame, which makes the wind ties even more secure.

The wind/rain screens are also useful for privacy and sun protection. I've been showering in the Clam, on the downhill side, and I close up the shelter to ensure my privacy. I also keep up a couple of the screens on the sunny side to shade the ice chest, trying to keep the ice last as long as possible.

Mainly, though, the Clam provided me with an extra room during the constant rain, allowing me to cook without being rained on, and providing me an extra room to get out of the tiny trailer and sit in a comfortable chair. Even with all the rain, the shelter didn't leak, or at least so little that the tables and the canvas chair never were dripped on. Towards the end of the four days, the shelter did get wet inside, just a faint sheen of moisture, but I believe this was because the humidity was 100%. I could still sit on the canvas chair, and the bit of moisture on the metal tables wasn't a deal breaker--compared to the rain outside. 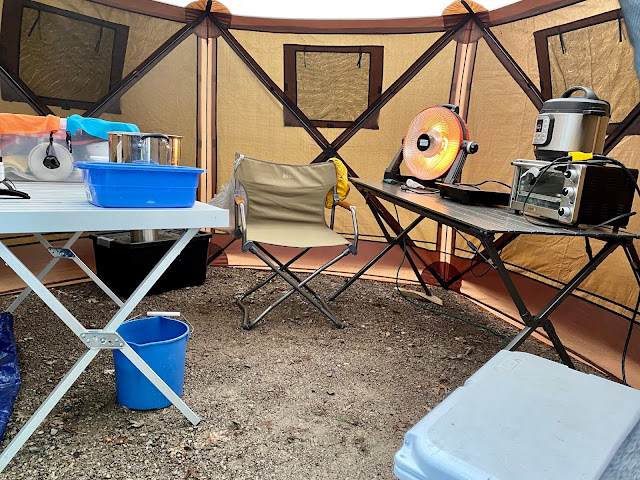 It was cool enough at times that I used my infrared heater, which also made a great reading light. I believe that I was more comfortable and relaxed during the rainy days because of the shelter. The shields stopped the rain; I even added our sixth shield over the Clam's entrance. It sagged a bit at the top but did block most of the rain.

Our Clam Quick Set 140 x 140 is pretty big, but when bundled up in its case, it fits easily into the back of our Pathfinder with the seats dropped. I bought stronger metal tent spikes for securing the shelter, but that's pretty standard for all such purchases. With my wife working in the shelter as her office space, I'd have to empty out half of the equipment, but on this two-week stay, my wife is only camping with me on weekends, eliminating the need for the Clam to also be our mobile office.

All in all, my wife and I are happy with the Clam. It's sturdy, versatile, and is easy to assemble--if you follow the instructions. Which I plan to follow to the letter from now on!
at September 17, 2020