I Help Clean Up a State Park--Have You Ever Done This? 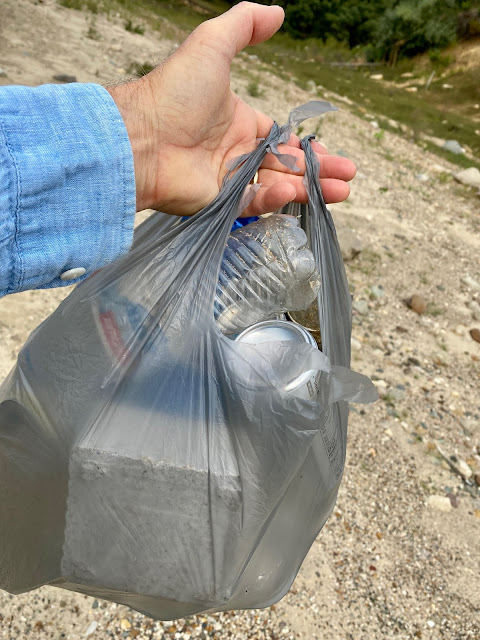 I kept forgetting . . . and then finally remembered to bring along a plastic sack on one of my daily hikes along the shore of Rathbun Lake at Honey Creek State Park. It was a Walmart sack (given to me by a friend to be reused), and it scrunched up to a tiny unnoticeable weight in my pocket as I headed out for my two-hour walk. It was going to be a hot day, so I took off in the morning, the wind and the lap of waves on one side as I walked the sand-and-gravel beaches, and the tan, sedimentary bluffs on my other side, above the waterline. I would pick up trash on my way back, cleaning the shores and doing my small bit to allow the man-made reservoir to retain as much a sense of untrammeled nature as a manufactured environment can, which is a goodly portion in Rathbun Lake's instance, since its large expanse promotes a long view across the water, with gulls, eagles, and buzzards floating on the air currents rising up from the sun-warmed bluffs, and with an occasional egret fishing in the shallows. As I was trying calm down my jacked-up modern sensibilities with the hike along the lake shore, I was continually interrupted with trash--beer cans, empty Styrofoam worm containers, plastic bottles and other trash. Sometimes hiding in the brush beside the beach, carried in by high water, but mostly out in plain sight, our human trash was an eyesore, but one that I could choose to lessen. My hike was a there-and-back one, and on the way back, I filled my bag with trash. Picking up trash definitely changed the focus and emotional tone of my hike, but rather than a reflective stroll, on this hike I was able to do something concrete and positive here at Honey Creek. It was a way of making or leaving my mark on this beautiful place--by removing the defacing trash others have thoughtlessly left behind.
My return walks over two days resulted in three bags of trash, a collection of various items, most of which seemed destined to have a long, enduring life in the wilderness if they weren't removed.
I was heartened and impressed that after two days of trash pick-up, I had been able to clean the beach area an hour's walk long. Carrying a trash bag along with me on hikes is a good idea, I think. Collecting trash (and not every hike need to be a trash collection day) is a good way to support our parks--a concrete, simple, and effective way. When I took a walk with my wife the next evening, my hiking experience was improved by not continually seeing other people's trash. Picking up trash is a behavior pattern I believe it will be easy to continue.
at October 01, 2021