"You just spendin' the night?" the ranger asked yesterday when I arrived at Geode State Park in SE Iowa.

"No, I'll be staying at least two days, probably longer," I replied, and then the ranger provided details of the winter set-up of the campground--one active water spigot at the campground's entrance, electricity available at the campsites, and the vault toilet location.

"You'll most likely be the only camper for your stay," he added, and in my mind I thought, "Yay!"

Camping in the winter season is an experience in solitude, something that is much more elusive during the active summer season. My main perception of the campground right now is one of stillness, just that, a cessation of activity. I packed up and headed out this week because the weather will be warmer--in the 30-60 range--wanting to enjoy maybe some of the last milder late-fall weather before winter arrives. Also, I'm having a tooth replaced soon, and I'm not sure how intrepid I'll feel during the multi-stage process.

The experience of stillness is enhanced by the mild breezes and the sunshine today, and I'm looking forward to some exploratory bike riding later on today and tomorrow. There is a multi-use trail that circles Lake Geode, so today I plan to find the trail and gain some familiarity to the area prior to tomorrow's 7.4 mile ride around the lake. The ranger mentioned he wouldn't attempt the trail with a 10-speed, but I assured him I had a bike with 2-inch wide tires. Even so, the ride will consist of about half riding and half walking, based on my early reconnaissance. The main purpose of this trip, though, is to rest and rejuvenate, making sure I focus on sleep, meditation, simple food, and exercise. Last year, once the ice and snow hit in January, we were locked in for at least a couple of months until the spring thaw. Even with roads cleared and temperatures a bit warmer, campgrounds were still snowed in and inaccessible. I hope this year is different, and camping is possible off and on during most of the winter. Next spring I hope to camp in the primitive section here at Geode SP with my Airstream Basecamp, using my Zamp 230-watt solar panel suitcase for power. That should be more secluded, even during the busy season. It's wonderful to be in a fully-developed, modern campground and still experience solitude. The trees in the forest surrounding the campground lean in toward the campground. The sleeping sycamores among the campsites cast an aura of stillness and silence. The gravel parking spots and the paved roads, the green picnic tables and the metal stumps of the electric hook-ups fade into the background, disappear beneath the sky. I'm tempted to say that the silence of nature embraces the campground when it's empty, but that silence is always present. We just get distracted by the human activity during the busy season--RVs pulling out or backing in, dogs and children noisily playing. The silence and stillness between all those sounds and sights goes unnoticed.
I am the only human being in this campground. I gladly share it with the deer and sparrows. Perhaps I will become as still as the sycamores with their white and gray trunks, their faded beige leaves. With some luck and perseverance, perhaps that is in my nature.
at November 30, 2021 No comments:

A Day Ride on My Bicycle 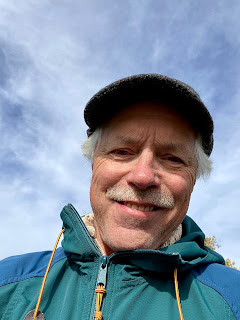 A Basecamp for Fall Hiking 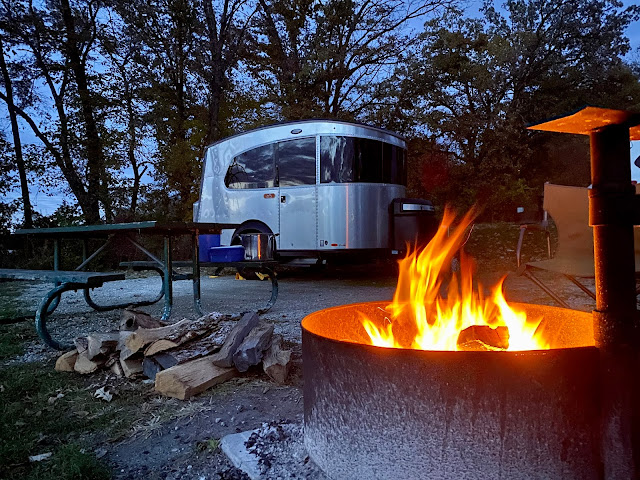 Last night before bed, I brushed my teeth and then went outside my Airstream Basecamp to rinse my mouth and my toothbrush. It was an old-school camping routine, one that I had adopted when camping with my standy tiny trailer that had no plumbing. Spit outside after brushing my teeth. Wake up in the morning and crack the ice in the water bucket outside, then rinse my face. Sit by the fire in the evening and read with a headlamp. Those are good memories, and my last three days of camping at Lake Darling State Park just reinforced those good memories and the practical, simple camping practices I learned while tiny trailer camping. 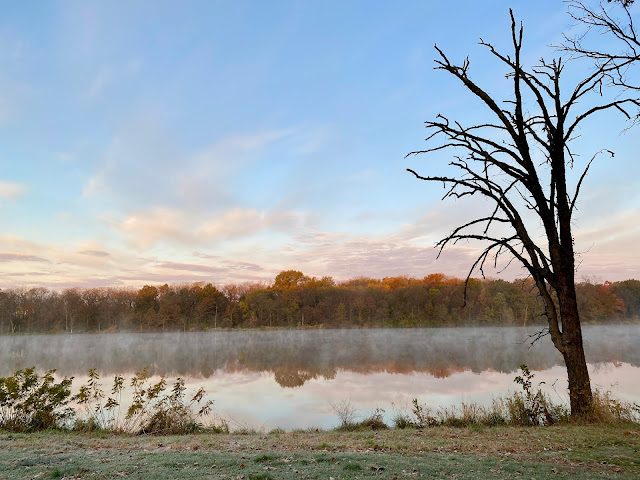 This week brought the first frosts of the year with temperatures in the mid-20s, so prior to this trip I winterized the Basecamp, draining tanks and flushing water lines with RV anti-freeze. It was my first time winterizing the Basecamp (or any RV), so I suppose I'll have to wait till next spring to find out if I did everything correctly. However, now that the rig is winterized, it has become in a way a larger, more grand version of my little RTTC Polar Bear--a small trailer that required many camping necessities to be done outside or, if inside, in a modified manner. Winter temperatures also necessitate some acknowledgement of condensation factors, which especially means being careful with cooking. I enjoyed my old-school camping trip, though, and appreciated how the little Airstream Basecamp (as opposed to a tiny trailer) was easily adapted to a simpler style of winterized camping. The transformation can be described with just a few significant points of change.Winterized camping in my modern Airstream Basecamp has that old school vibe--more outside time for camp chores and routines, but with the inside of the camper available when I just need a break and a little comfortable time. As for when I winterize, I chose to do so early. Forecasts indicate I probably could have waited until late November this year if I were willing to turn on tank heaters and to keep the camper warm inside, even when parked at home. That's why I recently had a 30-amp RV outlet wired for my garage and driveway area. However, a lot of campers who don't winterize early are traveling south, and the cold weather is a temporary inconvenience. For me here in Iowa, the certainty is that it's now frosting, then it's going to get cold--and then it's going to get damn cold and stay that way for several months. Rather than play freeze-the-pipes roulette, I just winterized and got it over with. What I've lost in convenience, I've gained by skipping the worry. 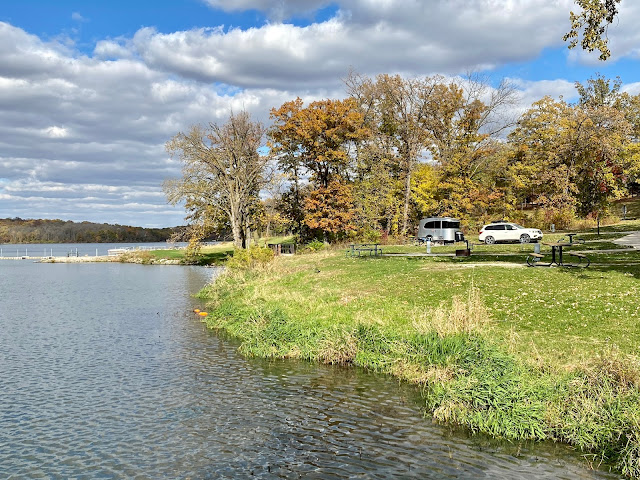 At this point, I can camp for as long as the roads are safe, as long as I'm careful about managing condensation in the cold weather. (See the article "Minimizing Condensation in a Teardrop or Tiny Trailer") What I've learned from reading online posts from other small trailer owners is that your trailer doesn't have to be tiny to have a condensation issue. Fortunately, condensation remedies are science-based and fairly straightforward. Usually sometime in the winter, though, we have an Iowa combination ice-and-snow storm which dumps its slippery precipitation and then keeps it frozen for weeks to months. After such a storm, even if the roads are cleared, campsites are locked up with the snow and ice, last year for at least a couple of months.
Until then, my little trailer is a tiny trailer mansion--with its own room for the toilet, with a kitchen, and with a built-in furnace. Sometimes I just walk around in my trailer, thinking to myself, "Look, I can walk around, not just one step forward and one step back!" This will be our first fall and winter season of camping with the Basecamp, and I'm looking forward to it.

Invasion of the Stink Bugs 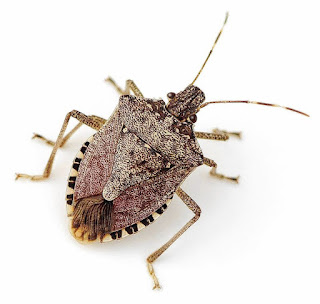 We were in spaceship Kepler of the Airstream Basecamp fleet, stationed in the Wildcat Den State Park quadrant when the invasion occurred. These micro-sentients cleverly disguise their spaceships as tiny, shield-shaped stink bugs. They fly, they crawl, they swarm--they invade.

Homes can be invaded, and through our experience, so can camping trailers. After our invasion, I researched the stink bug. While there are over five thousand species of stink bug in the world, the current villain is the brown marmorated variety ("When Twenty-six Thousand Stink Bugs Invade Your Home"). Airstream, the royalty of travel trailers, is not so royal that the stink bugs are reluctant to invade, and our sixteen-foot Basecamp we found especially vulnerable. Here's how it all went down not in a galaxy far, far away but in a state campground a little over an hour away.

Our Airstream Basecamp is a tiny, 16-foot toy hauler travel trailer. I've traveled with a folding bicycle secured in the trailer's walkway, and kayak's are also stored inside by some. The rear door has a snapped screen to keep out bugs when the door is open. My wife and I have found that the snap screen works well for flying insects and that we can use the screen at night to keep out mosquitoes. However, the stink bug invasion taught us that insects that crawl (although stink bugs also fly) can find ingress by just cozying up to the screen and then finding a small space between the screen and wall; they just keep on edging toward the warmth and then find their way inside.

I'm sure we threw out at least a hundred of the stink bugs while camping, and now even two weeks later I'm still finding a few of the bugs as I clean out and refurbish the trailer for our next trip. Yesterday I winterized the water system and found another five bugs hiding beneath the seat cushions. I threw them outside and then later wondered, am I just seeding my yard for bigger crop of stink bugs for next year?

Our big realization was that if we had not been primitive camping, we could have closed the camper and switched on the air conditioner. Wildcat Den only has a small, primitive campground, though, so we had to deal with the stink bugs on a one-by-one (or handful-by-handful) basis. It definitely wasn't what we had planned! It was an odd experience going to sleep, wondering if one of the bugs was going to drop on your face during the night. Nothing like the heebie-jeebies as a foundation for a good night's sleep!
It was an unusual camping experience for the weekend. We had to deal with the unusually excessive heat. There was the invasion of the stink bugs. Also, on our Saturday hike, we left the trail and walked back to camp on the hot asphalt road because we were told that ahead of us on the return walk, a hiker had collapsed from dehydration, and there were about thirty emergency rescue personnel and hikers creating a bottleneck on the trail. We chose to walk the road to allow for social distancing.
I suppose every camper has its unique construction challenges. For the Airstream Basecamp, the rear screen definitely has its limitations--especially for keeping out crawling insects who are attracted to warmth. Our experience wasn't exactly biblical in terms of our suffering, but we did spend a lot of time engaged in a weird parody of "catch and release" that many anglers practice. We definitely weren't telling those stink bugs we tossed outside, "Now you go off and grow up and get bigger. Then maybe we'll catch you and have you for supper!"
at October 26, 2021 2 comments: