A lot has been going on lately both in my personal life and also on spring camping preparation. For instance, personally, last Thursday I received my second COVID-19 vaccination, and tomorrow I get to got to the dentist for a couple of small fillings. The vaccination side-effects were real but relatively minor, mostly fatigue and a lot of naps for 48 hours, along with a loss of appetite and a bit of a fever. However, it's now the third day and I'm back to normal--which means, of course, that getting tired and taking a nap will now be because I'm old and not because of a vaccination. And as for the dental appointment, it's been a while since I've had to have a cavity fixed, so I guess I shouldn't complain too much. I don't have to enjoy myself, but I shouldn't complain too much. (Update: those two small cavities turned out to be one large cavity beneath an old filling in a back molar. How do I describe the intense experience? Well, imagine twice during the procedure the dentist stopping, looking at me, and saying, "I'm not hurting you on purpose." I just kept repeating to myself, "This too shall pass," and it did--eventually!)
One great happening is that I have retrofitted my Airstream Basecamp's electric hitch jack back to its original manual jack. The reason I did this was because the rear hatch to my Nissan Pathfinder SUV would sometimes not open with the taller mast of the electric jack. Philip Pickering at RV One in Des Moines set it up so that the retrofit was free, although I did have a two and a half hour drive. I had been given the electric jack as part of our purchase, but the company understood that having access to the Pathfinder's rear hatch was important and provided parts and labor for the retrofit for free.

"You're going to miss that electric jack," Philip told me after I had shown up for the retrofit. "I have no doubt," I said, "but even since I've been here today and the original manual jack is now back on, I've opened the hatch twice. There will be times when I'll say that I wish I had the electric hitch, but not as many times as I'd be frustrated by not being able to open the rear hatch." 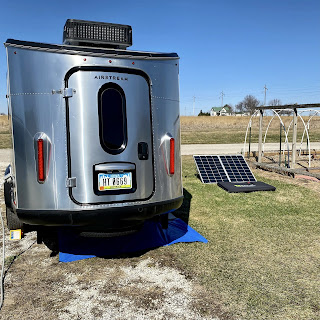 Another great milestone is that we've bought the Zamp 230-watt solar suitcase kit for our trailer. I've only hooked it up once in the driveway to make sure it works. It was easy to hook up with the Basecamp being solar ready with an exterior Zamp plug. Although there aren't many places to truly boondock here in Iowa, there are a lot of primitive campgrounds and campsites that we can now stay at for longer periods of time. We didn't buy the solar roof package with the new unit because so much of our camping experience is in established campgrounds. I'll write in more depth on the solar system later when I've used it more.
I've also purchased a Yakima OffGrid Roof Cargo Basket, which will allow me to take some of the gear from the rear of our SUV and to open up the back some. My son helped me with the final mounting yesterday. I'm not looking to move a lot to the roof, but just some of our gear up on top will open much more space. Etrailer has done a good job of providing me with necessary supplies. Their prices are good, too, but if you find a cheaper price, let them know and they'll match it.
This upcoming week I'm also looking to get both of our vehicles serviced so that they'll be ready for travel. The week after next I have an appointment at a local RV dealership to have our Basecamp de-winterized. They said they will let me watch and take notes. Next year, my wife and I might be heading out in January-February for some time on the Atlantic Ocean, maybe South Carolina. That means we would have to de-winterize when we arrived in warmer climes and then winterize when returning to Iowa, since March in Iowa can still be mighty cold.
As for future camping trip planning, Sandy and I are organizing a fall trip to Michigan, using Traverse City as our focus spot since we've been there once. This time, however, we will explore both the shores of Lake Michigan and Lake Huron. We've already made reservations at two state parks, bought a park pass, and have also signed up for a year with Harvest Hosts. With a discount, the HH fee was under $70, and we think we can use the sites for on-the-road travel on the way up and back. Although some of the sites aren't much better than a Walmart or a Cracker Barrel, we have found a couple of sites that might work--and I'm researching more. Even with the parking lot camping at Harvest Hosts, though, there appears to be an effort to make the stay fun. The chambers of commerce, for instance, are consciously selling the beauty and uniqueness of their cities.
The funny thing is that we don't want to travel through the Chicago area, so rather than diagonaling northeast up to the lakes, we'll be traveling first east and then north on a route that skips larger cities, Peoria being the largest city we would travel through, I believe. When looking at our route on the Harvest Hosts' map, there is this band empty of host sites--which happens to be our route. I take this to mean that we have chosen a rural route, but one vineyard, one chamber or commerce parking lot, and one farm seem to be possible stopping sites even if they aren't located at the best mileage locators. We expect to be gone about a month.
I also know that some spring and summer reservations closer to home will be necessary, so I'm looking at the Army Corps facilities and state parks for some times, trying to coordinate with the times school will be out for the grandkids, the swimming possibilities, and how flat the area is for kid bicycling. We want to do this at least a couple of times this summer, hopefully before the weather becomes too muggy, the water too scummy, and the chiggers too hungry.

Another topic that I'll be writing about in my other blog, Tom Kepler Writing, is the fact that my younger brother passed away two months ago. My parents, my older sister, and my brother are now all gone--kind of a weird feeling. My brother's passing has taken some time to take care of matters in addition to the emotional processing. I won't write more here except to say that we had some good camping times together, all of us, parents and kids.

Oh, yes, and top of all the travel plans, I've been working in the garden. Arugula, chard, radishes, and kale are up in the greenhouse. I hope to plant some cilantro soon, and peas, too. I've planted some lettuce, but it looks like I'll have to replant. Early year crops are always so much fun to plant after a long winter. Today's supposed to be 78 degrees, so yippee!

I had a funny surprise yesterday morning on my way to the dentist. I saw that the wind had rattled open the door to my little greenhouse during the night. Going to close it, I peeked in and saw a bunny looking back at me! She was in the process of making a nest, digging up some arugula. It was a great spot for her to nest--as long as I kept the door open and didn't mind her eating all the plants! I shooed her out and closed the door. Mamma bunny will have to find someplace else in the yard.
These are all the reasons I've taken a brief break from my blog writing. Soon I hope to be out camping again, writing about my experiences, and also writing about the great camping adventures others are having. Blog writing, at least for me, is a blend of personal experience, camping stories, and research. I've also almost completed a camping book on the experiences of RTTC tiny trailer owners. It will be available toward the end of April on Amazon. I'm planning soon to take two or three days at a local campground for one final read-through of the book. It's wonderful to be able to share, be it with blog or book, and I wish everyone a safe and fulfilling spring camping experience.
at April 07, 2021

Email ThisBlogThis!Share to TwitterShare to FacebookShare to Pinterest
Labels: Celebrations and Milestones, Coronavirus