Should I Ditch the Electric Trailer Jack? 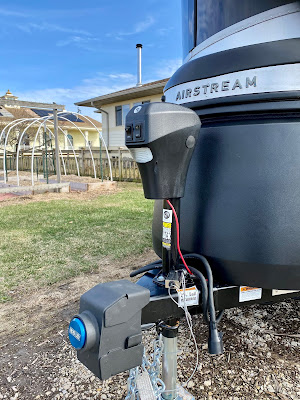 I've managed in this wild late winter to camp twice with my new 2021 Airstream Basecamp. One unpleasant revelation was when, on my second camping trip, I discovered that the rear hatch of my Nissan Pathfinder wouldn't open when the trailer remained hitched to the SUV. The mast of the electric jack blocked the door from opening fully. The hitch had been given to me free by our local Airstream dealership and mounted on our trailer orientation and pick-up day.
As you can imagine, having my rear hatch blocked didn't exactly thrill me. After some research with other BC owners, I determined the height of the standard manual hitch jack was 14.5 inches high. Talking the situation over with my wife and reflecting on the situation some, I decided that whatever the hassle of using the manual hitch jack crank (very little, from my experience with my tiny trailer), the hassle of not being able to open my rear hatch while hitched was greater. The solution, of course, was to remove the electric hitch and retrofit the trailer with its original manual crank system.
I had two problems: 1) the dealership had not given me the original manual gear when I towed the trailer home; and 2) I wasn't 100% certain that the manual jack wouldn't block the car's rear hatch also. I planned to email the dealership regarding the trailer's original hitch parts, but first I wanted to see for myself what the clearance would be with the original hitch height.
Imagine my surprise when the door narrowly missed the mast and opened the whole way! It was a close miss, but there it undeniably was--the rear hatch fully opened. How can this be? Thinking about it a bit, I realized that when the door had been blocked, the car was angled with the rear down slope and the trailer somewhat level, which moved the hitch mast close enough to the vehicle that the arc of the door's opening intersected the hitch mast. At home in the driveway, the Pathfinder was angling slightly downhill to the front, increasing the distance between the opening arc and the hitch mast.
I wondered for a bit that if the electric hitch mast blocks the rear door, could I just put one or two leveling blocks under the rear tires? That would adjust the angle to increase the opening leeway. However, that's a bit of extra work, and what if I'm at a gas station or Walmart and just wanting to quickly pop open the rear hatch? I was back to the original question: what is the biggest hassle, using a manual hitch jack or not having access to the rear hatch?
What I realized was that the door would find a way to be blocked at inconvenient times . . . given enough time . . . such as at busy gas stations or during a rain storm. Even with the RVOne dealership two and a half hours away, I think it will be worth the effort to retrofit back to the manual hitch jack. The manual crank is lower and also farther back than the bulb-nosed, taller electric hitch jack. With the manual jack, I won't ever have to worry about the rear hatch being blocked.
With the manual jack crank, both jack and the rear hatch door will always be fully functional. Fully functional, I like the sound of that. Besides, I can use all the exercise I can get. I've written to RVOne, and what I'll do is schedule the retrofit during a camping trip to a state park near Des Moines, now that spring is here. Yes, that sounds like a plan.
at March 19, 2021

Email ThisBlogThis!Share to TwitterShare to FacebookShare to Pinterest
Labels: Airstream Basecamp, Gearing up