"D-Day (Departure day) has arrived [January 7, 2022]. All the waiting, planning and preparing are behind us as we leave our good friends Alex and Tavia’s house. Finley ever watchful in the backseat could sense it, that feeling of excitement and trepidation that courses through us as we start a new adventure. First stop was the CAT scales to make sure we were legally within the weight capacity of both the truck and camper. Had we packed too much? Probably. Had we forgotten anything? Probably but too late now we are on the way!! CAT scales said we were a bit porky but within specs so as the French say 'on y va!'"

Thus Allan Finlay begins his great epic Western travel adventure--by traveling east through North Carolina, visiting and overnighting at a couple of wineries, and finally landing at Oregon Inlet Campground on the Cape Hatteras Seashore. "This is where our journey really begins in my mind and though I have not yet dipped my toes into the frigid Atlantic Ocean, I will before we leave to head west.  Once you leave the commercial Nags Head region and head south the true Outer Banks reveals itself.  A line of sleepy villages dot this narrow island all the way down to Hatteras."

Dipping toes in the Atlantic Ocean before heading west to the Pacific? Makes sense to me. After all, it's a tradition for bicyclists traveling across the USA. Allan, the RTTC Travelin' Man, and Finley, the Blue Heeler doggie, were officially on their way, off to adventure; and I was officially beginning my researching adventure of documenting their adventure--from Allan's blog, A Bloke and a Blue; from his Facebook Rustic Trail Teardrtops and Friends group page posts, and from a few email responses from questions I sent Allan after doing my research. 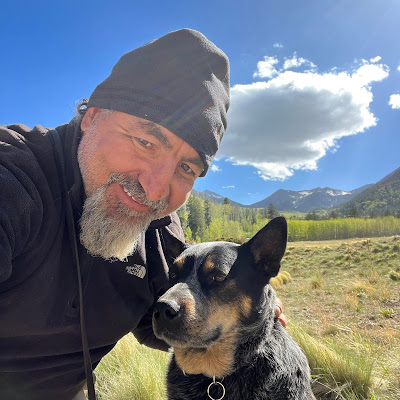