So here I am camping at Pikes Peak State Park in Iowa, and in addition to the usual 20-30 footers and the RV buses, I'm happy to say a number of tiny trailers have also arrived in my campground neighborhood. One of them is a tiny tent trailer, although it might be more accurately called a hybrid tent trailer because the unit is mostly hard-sided. It's a light, functional unit--small yet packing a surprising number of camping comforts, including an air conditioner, propane heating unit, and a refrigerator.

Brian and Michele Tapp bought the unit and have owned it four months, connecting via Craig's List with its original owner. The Coachmen Viking 9.0 TD Express weighs a little over a thousand pounds, so the Tapps can tow it with their Honda CRV. This is their third trip; their first a time together was with friends at Yankton's Lewis and Clark Lake. They felt the Viking camper was an opportunity to try out camping without an initial big investment, especially since they didn't have to buy not only a camping unit but also a tow vehicle.

In addition to not having to dish out a lot of cash for their almost-new camper (used only four times by the first owner), they also didn't have to invest in a lot of camping equipment. They were able to use a lot of their tenting equipment they had purchased the year before, and also since Brian enjoys pre-game tailgating parties, some of that equipment proved useful. 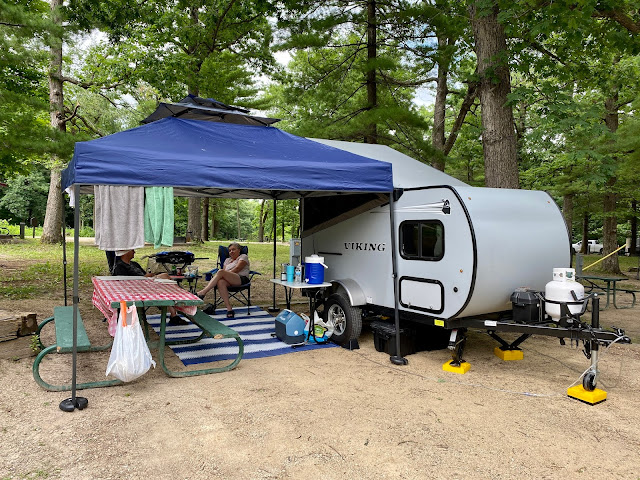 Michele said that their friends tend to fall into two categories when they say they've bought a tiny trailer. One group says, "Good for you!" On the other hand, there is the other group of friends that says, "What! Are you crazy?"

Brian and Michele's motivation to buy the Viking tent-trailer came from several sources. One was Michele's camping life as a kid, which began when she was ten years old and her dad rented a Starcraft tent trailer and headed out with the family. Her dad then stepped up to a "pull trailer" and then a 5th-wheel. When Brian and Michelle were married, the family celebration centered around a camping get-together, which consisted of families tenting, pulling up with their campers, or renting cabins. "Let's get the family together and go camping," was the celebration theme.

Another motivation for buying the tiny camper was the COVID-19 pandemic. What happened was that in order to be safe, Brian and Michele decided that they could visit by camping near where the parents lived. "We could be camping and outside, and they could come and see us" during the pandemic.

When Brian and Michele bought the trailer, the original owner provided them with a list of links to research online about the tiny trailer experience. Funnily enough, one of the links was this blog, so when they pulled up at Pike's Peak, they saw my Airstream Basecamp and my white Nissan Pathfinder. Brian told his wife, "I think that's the Green Goddess Glamping blog's rig!" Talk about serendipity! Since we've introduced ourselves this trip, we've had some good chats, shared some fun stories, and I've had a chance to get a good look at their tiny hybrid tent-trailer.

It has every bit as much room as my original tiny "standy" RTTC Polar Bear, and with some modifications, it might even have a bit more room. Tiny trailer camping and even camping with slightly larger "little" trailers (such as my Basecamp) always is a matter of personal preferences and trade-offs. This YouTube video link provides a short walk-through of the Viking's set-up. Contrasting the Viking with my Polar Bear, I'd say the Viking is a touch bigger (especially if Brian and Michele modify the bed to add a table and storage much like the Polar Bear's). The unit is also lighter, even with the refrigerator and propane heater. The Polar Bear will probably be warmer in cold-weather camping, is a bit more secure from the elements, and also doesn't have to be raised or lowered to be used. This is definitely a plus when on the road, and you want a quick stop for lunch or a porta-potty break.

Since both Michele and Brian are still in their active work years, the little trailer they've bought seems ideal for their current needs. It stores in their garage and can be pushed in by hand. It was not a large investment, and it provides them with a chance to see if camping is something they really want to continue. For me, I was really caught up by the ingenious engineering of the tiny tent trailer. I'm sitting in my little Airstream Basecamp right now, which is a big step up (or bigger step up) from my bicycle camping or my tiny trailer camping days. I'm very comfortable right now--but, wow! I really like tiny trailers. They are really the epitome of "less is more," and Brian and Michele's Viking TD Express is a great example that comfort can be a simple thing.
at July 13, 2021