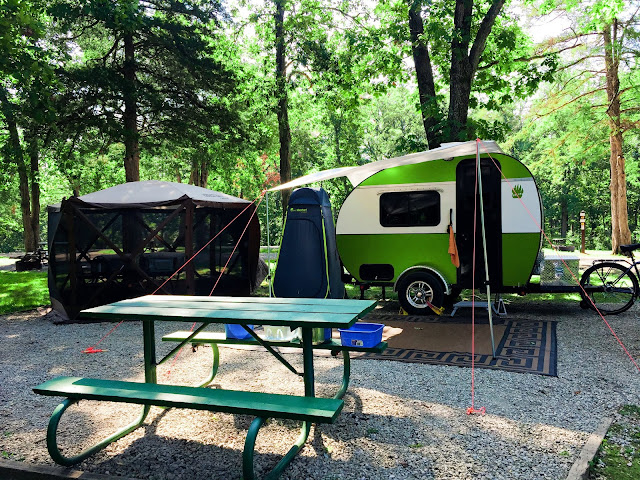 My wife and I are camping for 10 days at Lacey-Keosauqua State Park, the longest we've ever been out with the camper, and the longest we've ever stayed at one place. We arrived at about four o'clock in the afternoon on Labor Day Monday and set up camp: trailer, utilitent and portable toilet, and the screen room. We saved the trailer awning and our signal booster antenna for the next morning. Now we have no more setting up or breaking down for over a week. That's why I used "basecamp" in this title of this post; we plan to stay here and relax for a while. However, our camp will be the center of a number of diverse activities.

My wife will work, but she and I will still take time to hike. I will take day rides with my bicycle. We brought good, healthy food so we can eat well during our stay. Halfway through our stay, we'll head home to check the house, renew our cooler ice, and buy some fresh food to bring back to camp.

Today on the second day of our excursion, we're taking it easy. The temperature will top out at ninety degrees today, and then the highs will be significantly lower for the duration of our stay. We're relaxing, enjoying our air conditioner, and just experiencing what it's like to have a living space outdoors--and I say "outdoors" because I am currently in our screened room, using the shade and our box fan to to stay comfortable. One of the realities of camping this season has been the pernicious gnats or tiny flies. The screened room provides a haven away from the pesky insects, which has been a real relief.

Later in the afternoon: It's 4:30, and after a quick trip back home for a computer connector left behind and then an ice cream, we are in our camper, using the air conditioner and, once again, balancing off-gassing chemical smells with the need for cool air. We're hitting somewhere in the middle--neither quite cool enough or with quite the fresh air we'd like. We're getting by, though. My wife had a good day with her work, and I completed our basecamp set-up and had some good writing time. We hope it's cool enough to sleep well tonight (last night was), and tomorrow should be a whole new day of quiet interaction. And I hope to have some fun cooking!


Keeping with the plan to use our camp for different fun activities, on Wednesday, Sandy and I first took a walk to a park shelter and picnic area, somewhere around three miles. We followed the asphalt road, which was less buggy, turning off onto the road to the shelter, a more more quiet and tree-lined experience for us. I was raised camping in California's Sierra Nevada mountains, so the experience of walking down a Midwest road or trail where the deciduous trees form a green canopy over our walkway is a view that I never tire of. I always feel like I am in the nurturing embrace of nature, whether surround by the greens of spring and summer or the bright fiery colors of fall. Even in winter, the stark, bare branches are beautiful in their sleep. Trees are a miracle, some tall and timeless.

Lunch was fun to cook, with me using our new Clam Quick-Set shelter to be out of the sun and away from the insects. It was enjoyable to work in our new camp configuration. One thing I did in the afternoon was to order a 25-foot 30 amp extension cord and an pig-tail adaptor to 15 amps. That way I will be able to use the extension cord while cooking and use two cooking appliances at once: Instapot pressure cooker, induction burner, and/or toaster oven. That should allow for less cordage!

When Sandy got to work after lunch, I went for a bike ride for a little less than two hours, traveling around ten miles and seeing parts of the park I had not seen before. Buildings and bridges of Lacey-Keosauqua State Park were built between 1933 and 1942 by the Civilian Conservation Corps during the Great Depression. Lacey-Keo is Iowa's second state park, established in 1921.


The first part of my ride was to the Lake Sugema day access area, a bit over four miles round trip. That wasn't long enough, so I also traveled the park road northeast out of the park, past Ely Ford, which was three miles one way. It was good to know the my ten miles that day will also allow me to ride a loop, taking the park road northeast to Highway J40, through the hamlet of Pittsburg and on to Keosauqua, then taking Highway 1 to the park's main entrance and back to camp, a 10-mile day ride.


The little hamlet of Pittsburg is connected to author Phil Stong and his novel State Fair (1932), later made into several movies and musicals over the years--one movie with Pat Boone and Ann-Margret (1962), the first movie with Will Rogers (1933). Evidently, the novel (it's been many years since I've read it) contained "loose" behavior of the farmer's daughter at the state fair, and the novel was banned for twenty-five years from the local library in Keosauqua. Stong said, "Iowa generally felt that Iowa girls wouldn't do such things." According to my research, the novel--which out-sold all expectations--had a dark side that contrasted city and rural farm life. It must have struck a chord of honesty in the readers. The movies, of course, sweetened up the plot and ending. 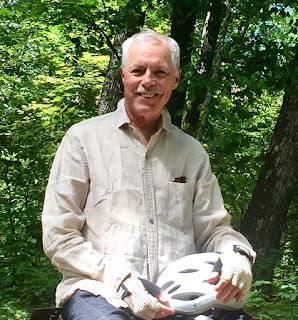 Wednesday night was cooler, so Sandy and I tossed an extra blanket on in the middle of our sleep. I woke up early and decided to provide a fun start to the day, building a campfire and then baking potatoes for a later home fries and scrambled egg breakfast. Needless to say, we ate lunch a little later than usual! (I am glad to note that over the night, a raccoon did not open the cooler and steal the baked potatoes.) The toaster oven baked our red potatoes beautifully, and the induction burner provided the heat for our potatoes and eggs. The outside kitchen seems to really settling into an easy set-up. Before lunch we took a short walk but found the gnats more lively in the heat.


We have found the Clam shelter to be an effective space for Sandy to work. In the late afternoons, we mount two or three wind screens to block the sun. Then if necessary, we use a box fan to move air. The result is an effective work space for Sandy. For me, I use the space for both computer work and cooking. It's great to be out of the sun and away from the bugs. I've been inside the shelter today with Sandy, cooking, writing, and reading. It's supposed to rain later in the week, so I will probably add the guy ropes to the tent before then. I have it staked now, but the guys should stabilize the structure in case of thunderstorm winds. Of course, if the forecast is for severe winds, then I'll probably put up the shelter and the trailer awning.

Friday I took Sandy home for one night. She hadn't slept well and just needed a night home in bed. We restocked groceries, washed a couple of loads of camp laundry, iced up the coolers, watered the garden, and I headed back to camp. Sandy will be coming Saturday afternoon, catching a ride with her daughter and the grandkids. The kids will have plenty of company here at camp. I arrived back at camp to a campground filling up with the weekend crowd--lots of big rigs and happy kids!


I met a couple from Iowa City that arrived with a 13-foot Scamp. It's a pretty trailer that meets their needs. They've traveled more than we have, and have taken the trailer to Texas to visit kids and to camp. Their Scamp has a bed/table in back, a stove and sink, and a small sofa in front that can also be a bed. They did not want a shower/toilet up front. I did notice, though, that they had a Luggable Loo inside. Most of the rigs here now are large American models with slide-outs, pulling by large American pick-ups. I'm sure they are comfortable, but I just don't want to tow something that big. I also like the smaller trailers that because of their size have access to more unique or natural campsites.

Saturday night brought rain, and even though the rain and thunder kept us up, we enjoyed the experience of being together with the sound of the rain falling upon the roof . . . in this case a peaceful sound since the storm was not violent or excessively windy. Our awning (we use large suction cups, adjustable tent poles, and a white vinyl tarp) held up well, as did our new screen room. It rained quite a lot, and the next morning after checking the trailer, I was pleased to find that a couple of leaks that we had last year are now fixed, thanks to my builder/carpenter son-in-law.

On Sunday we received a second and unexpected visit from our grandchildren and their parents, which was fun. While I was swinging my granddaughter (age 4), she said, "Grandpa, Mom and Dad are walking the dogs, Grandma and Jake are back at camp building a fire, why don't you and me take off and go to a playground all for ourselves?" I told her we could do that sometime, but the playground we were at was the only one nearby. She said, "Okay!" with a smile. Doesn't get much more cute than that!

Sandy and I decided, though, after the family left, that with more rain coming and then heat up to ninety degrees--and with another phone call from more of the family--that we'd pack up and head home. It had been a great trip with hot and cool weather, rain and shine, solitude and family, and work and play. There was a sense, though, that some family needs, and especially the heat and bugs coming after the rains meaning high humidity, that heading home and regrouping was a good idea.

I write this at dawn as the work week begins. Although our 10-day camping trip ended up being six days, I didn't want to change the title or the dream. As I've said before, flexibility is a big part of a "perfect" camping trip, and, after all, ending our camping trip early just means we can begin planning our next trip!


(Note: As the content for Green Goddess Glamping evolves, sometimes content focus will dictate that articles will be posted on some Facebook groups and not others. Articles on Dutch oven cooking, portable toilets, or bicycle day rides, for instance, could find posts in different groups. The best way to ensure that you are receiving all articles is to subscribe to follow this blog by email notifications.)