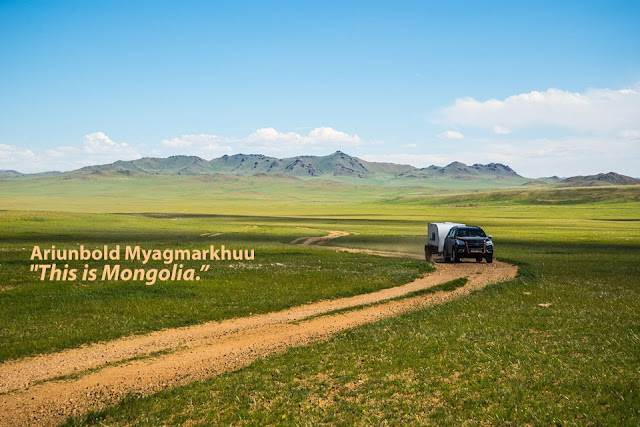 People living in a house will "never understand the life of those who live in tents," was the comment of friends of Ariunbold Myagmarkhuu who accompanied him on a tiny trailer camping trip this summer. Ariunbold, or "Ariuk," for short, lives in Mongolia in the capital city of Ulaanbaatar.

Ariuk feels his friends' observations are true, and provides as support the following story about his first camping trip with his new camper:


"One night, it was so windy that our fathers had to get up at night and tie the tents to our cars to keep them on the ground. While they were doing this, my family and I were sleeping in our trailer as if you were sleeping in your bed at home. Later in the trip, the wind actually blew the tent away one morning just after everyone got out of it for breakfast."

Mongolia is in northern Asia, between China and Russia. It is slightly smaller than Alaska and more than twice as big as Texas, or as Ariuk describes: "The size of Mongolia is about the size of Oregon, Idaho, Wyoming, Nebraska, Nevada, Utah and Colorado combined, with population of three million people. There are about twenty million people living in those states." Mongolia is one of the least densely populated countries in the world, with two people per square kilometer. The terrain consists of areas of vast semi-desert and desert plains, grassy steppe, and there are mountains in the west and southwest. The Gobi Desert is in the south-central part of the nation.

The mean (or average) altitude is a little over 5,000 feet, with the country's low point being Hoh Nuur at 1,837 feet, and the high point being Nayramadlin Orgil (Khuiten Peak), at 14,350 feet. According to research, Mongolia has a "sparsely distributed population throughout the country, and the capital of Ulaanbaatar and the northern city of Darhan support the highest population densities. Its natural hazards (always a concern for campers) are "dust storms; grassland and forest fires; drought, and "zud," which are harsh winter conditions." 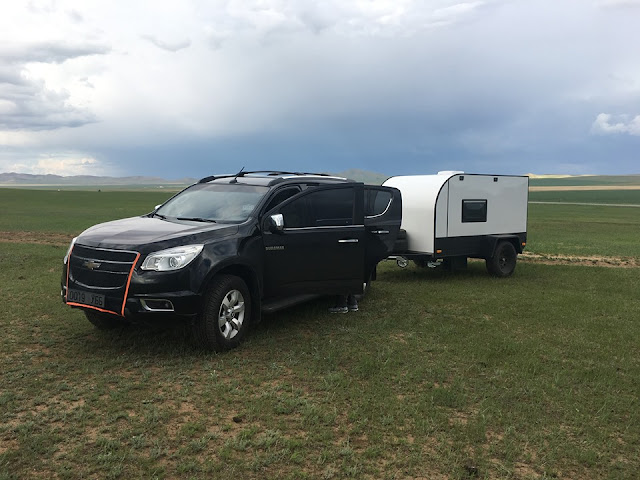 The rig that rides the steppe is an Ecocampor Teardrop, a Chinese brand/model which Ariuk pulls with a 2014 Chevrolet Trailblazer, the Asian version, which is called the Holden Colorado 7. The SUV has a 2.8L i4 Duramax II engine, and a 6-speed automatic transmission. The vehicle has a custom-fitted hitch and is wired for towing lights and electric brakes.

Because Mongolia is so sparsely populated, all camping is boondocking, according to Ariuk. "Off the grid is the only option in Mongolia in terms of camping. There are camp-bases or tourist-bases, but they are more like a motel in middle of nowhere." In Mongolia, Ariuk says, "people consider camping as going out of the city for a few days with with a tent and kitchen gear. Everything else is called 'out for fresh air,' including hunting."


Most commonly, Ariuk, family, and friends camp "by a creek or river, since there would be no town or camp-bases nearby." And, simply put, he prefers camping close to water. Ariuk adds, "I personally favor winter (no mosquitoes), but when camping with the family, our favorite is summer, specifically July."

Tent camping was the family tradition until the extended family began including people of greater stature and circumstance in life. Then Ariuk decided he had to up his game--and he bought a tiny trailer.

"The camping actually was an offshoot of off-road driving and fishing trips that I started enjoying since the early 2000s. I was so young a kid back then that the wind, rain, thunderstorm, snow, ice and my old Toyota Land Cruiser with leaf springs never bothered me. However, I started thinking about changing the way we do camping in 2009 as we welcomed a VIP into our family. In 2013, I purchased a utility trailer and then mounted a rooftop tent onto it, as a result of the VIP coming in our family and our love for camping. There was always a boiling dream inside of me since I can remember, the dream of 'towing a trailer.' Then a second VIP came into our family in 2016 and the first VIP showed his interest in a caravan a couple of times, so I purchased the tiny trailer in 2018."

Ariuk has modified his teardrop by removing the kitchen, since the larger group he camps with get up early and would be busy in the teardrop kitchen while his immediate family was still sleeping. "The modification is that I took out the kitchen unit. I don’t want people cooking and making all kinds of smells, especially early in the morning, because the kitchen will become a shared one. Tent people get up early and we don’t." 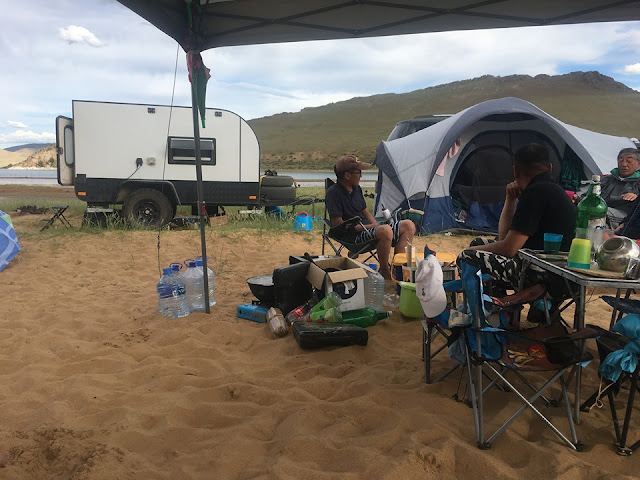 Having stepped up his game to include a teardrop trailer, the plan for their first family outing with the rig was for a 10-day outing. The first stop was to be in an area of sand dunes. The second night at a small village, and the third night on the river Baidrag, a freshwater river in the desert "with lots of fish." What was unexpected was for the trailer to break down on the way to the river. Aliuk explains this adventure in the Mongolian wilderness.


"The river Baidrag is about 100 kilometers to the northwest of the small village where we stayed, and the road is paved. We didn’t take any photos of river Baidrag, but it was a red color because of all the floodwater it had collected upstream. When we reached the river, the flood had made the water undrinkable and too high for fishing. Also, the dirt in the river was making the color of the river red, making the fish not able to see the bait. We had heard about the flood before we left the small village but wanted to see it. Plan B was to drive 150 more kms north to a creek named Zag. The paved road ended right before the bridge over the Baidrag River, and a dirt road with rocks and big holes began. On this type of road, if you drive below 40 kms/h you’ll feel everything on the road, and if you drive at around 60kms/h then it feels a bit smoother. With the trailer, when driving at 60km/h on a dirt road, braking is a challenge even with an electric brake. So, on one of those many holes and bumps on the dirt road, the trailer axle broke from its frame."


"We found out about the broken trailer frame at a smaller village after we had driven about 90kms. The smaller village had a number of signs for welders, but none I could reach. We decided to stay there to try finding a welder again in the morning. Luckily, we found one that evening, and he agreed to start working on the trailer early in the morning. That night was so windy that the other two fathers in our group had to get out of their tents in middle of the night to tie down their tents to the cars. The next night was our turn to sleep in the tent, as the trailer was not finished at the shop or yard, but I saw what they had done with their tent and did exactly the same before going to sleep. We had brought a tent just in case if anything happened, like kids wanting to sleep outside."

"The welder cut off the damaged part of the frame, filled it with metal with similar thickness, added a couple more layers of L-shaped metal under the frame as the bolts were long enough, and bolted the axle back to the frame. When you write about it, it sounds pretty easy, but actually it took about twenty hours of work. The electrical wires had been cut into two pieces, and fixing that added another two hours of work. We managed to hit the road after two nights and a morning. The trailer hasn't broken down again since then. A funny thing happened at the yard while we were bolting the axle back to the frame--the welder actually expressed his wish to attend a college to learn more about welding and get better at it. I saw the things lying around in his yard that had pretty good welds on them, so I asked, 'You are a good welder. Why go to college for it?' He said the yard was actually his dad’s!"

Everyone was tired when the repairs were finished and they finally took off. "The wind makes you tired, especially when you have nothing to do but to wait." The trip had to have another two days of rest added, bringing the total to fourteen days out in the wilderness. They had accomplished their goals, though, and certainly had a successful and memorable first trip with the camp trailer.


"I love my tiny trailer," Ariuk says, and advises tiny trailer owners to love and enjoy their trailers, too. Ariuk and his family plan to go camping "again and again." As for where to camp and for how long, "Nature and weather conditions really make the decision."


"My wife and I think that people who spend more time in nature love, care, and respect everything around, including trees, tiny creeks, crickets, birds, and most importantly human beings. So, the tiny trailer dream is to be camping with it with the next generation of 'VIPs' or, in other words, grandkids."

Like many other tiny trailer owners around the world, Ariunbold Myagmarkhuu finds bringing family and nature together a worthwhile pursuit. Because of the geography of the land he lives in, independence and self-reliance are a big part of any camping trip he and his family take. I can't help but believe, though, that as far as Ariuk's family is concerned, the "VIP" of the family is none other than Ariuk himself. Safe travels, and may the wind be at your back.

(Note: As the content for Green Goddess Glamping evolves, sometimes content focus will dictate that articles will be posted on some Facebook groups and not others. Articles on Dutch oven cooking, portable toilets, or bicycle day rides, for instance, could find posts in different groups. The best way to ensure that you are receiving all articles is to subscribe to follow this blog by email notifications.)
at September 13, 2019