From the Canadian to the Mexican Borders: Doug Pollard's Tiny Trailer Adventure

"I met people from all over the world. What an adventure!" How else can you describe a five-month journey of over 13,000 miles that spans twenty-one states from the Canadian to the Mexicans borders--and is boondocking throughout? Definitely, "What an adventure!"

When Doug Pollard was asked the general area he was traveling to, he replied, "I'm starting out up north, heading toward Washington state, then down the coast to California. Then the Southwest. The last time I made this trip, I hit twenty-three states and Canada three times so just about everywhere!"

In 2017, recently retired Doug Pollard decided to hit the road with his Little Guy RT, pulled by his Toyota FJ Cruiser. He left his West Virginia home in June, pleased with his vehicle, which he noticed did a good job of climbing mountains, dirt and backroads, and maintaining AC coolness inside while towing in extreme heat. "It's perfect for what I like to do: exploring backroads, 4+4 roads, and boondocking off the beaten track."

This was his third trip across the country. "I have gone back and forth, up and down, mostly backroads, spending four to five months each time going where the wind blows. I record every road and boondocking site on individual Benchmark Recreational Atlas state maps, so it would be hard to pick one route. Alaska is diffidently on the bucket list, if I live long enough. LOL!"

Doug headed west toward the West, but was still crossing the Midwest when he had his first adventure--the alternator went out on his Toyota while in Indiana. "Better now than later" was the consensus opinion, including Doug's, for the repair on his 2007 Cruiser. Doug had bought it from a business that dealt mainly in high end cars like Porsche, Audi, and Mercedes; however, when this was traded in, it was in such good condition the dealership decided to sell it themselves rather than selling it at auction.

The trip to his first longer stay in Montana included some exciting and majestic moments, though.

After auto repairs, Doug powered through Missouri and Kansas, finally making it to the Rocky Mountains and Colorado, where boondocking opportunities abounded, such as in Gallatin National Forest and the Timber Camp Recreation Area. He spent quite a bit of time there, boondocking, exploring, and hiking inside and outside of Yellowstone National Park, near Gardiner, Montana. He explored the Petrified Forest, getting a free permit at the Tom Miner Campground trailhead to take some of what he found. Besides petrified trees, Doug also discovered opals, crystals, old mines, and many more geological and historical finds. Doug summed up his experience with "I love it here." 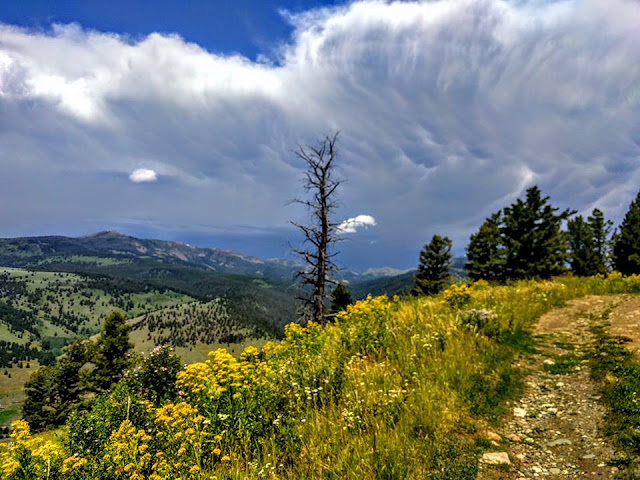 Along with Doug's boondock camping, there was a lot of hiking, exploring the countryside. Here are some comments from his Facebook posts.
Pacific Northwest Family Time

July ended with Doug on the road again to his son's house, visiting family in Washington state. The month of August and a few days of September he spent with his family, including his grandkids. They all worked, played, helped one another, and went on road trips and hikes. Doug's son also helped him with some upgrades for Doug's camper, upgrading the battery and then installing a plug for a solar panel to keep the battery charged when out in the wilderness. They made a 20-foot cord for it so it can be put almost anywhere. "The camper came with one of those small 12 volt batteries which meant I would have to run the FJ, almost every other day to keep it charged. Won't have to anymore." He sent big thanks for his son's help.


While hiking in the Mt. Baker area, the effects of the 2017 forest fires were all too obvious. "Went on a hike and a swim in the Mt. Baker National Forest yesterday. The smoke from the fires is blowing in from the east, can't get away from it." He later mentioned his experiences while traveling with the fires and firefighters.

"The fires in Montana were terrible, smoke so thick, it stings your eyes. Felt so sorry for the people that live there, you just can't escape it. Saw many a firefighter camp in fields along about a 300-mile stretch of Highway 90. They were living in smoke-shrouded tents by the hundreds. Then they have to climb up those steep mountains in hundred degree heat, not to mention the heat from the fires. They are not paying them enough. One firefighter died the day I drove through, sad."


Adventures also included a trip along the Oregon and Washington coast with family, including Orcas Island in the San Juan Islands. Fun times with the grandkids included starfish hunting in the tidepools and sliding down sand dunes. A kayak expedition and a hiking and camping trip with the grandson were part of the activities. The kayak trip was fifteen miles, stopping for lunch in the city of Snohomish. "Everyone was very tired by the time we finished the trip, which took nine hours to complete."

Remember that this is a tiny trailer boondocking journey, off into spaces less frequently traveled?
Well, Doug dropped off the grid in Idaho and eastern Oregon, taking in some rugged sightseeing as he began the last leg of his adventure. Meeting up with an old friend, they decided to explore ghost towns and old mines, soaking up frontier history. Gold mines, dilapidated buildings, and high desert were his stomping grounds for the next week or so.

The ghost town segment of his travels was ended with a drive and a visit to the Oregon coast, after which Doug  headed off for the Sierra Nevadas of California. "You probably won't be hearing from me for a while," he told his family, as he headed off down more back roads. The Sierra Nevadas at mid-September meant times of blowing snow.

"The Sierra Nevadas are beautiful, not to mention Lake Tahoe. Been driving thru some snow storms as I crossed some of the passes. Thankfully, none of the ones I wanted to take today were closed as happened to me yesterday. It was a long detour. I decided to stop early because it is supposed to drop below freezing, and Yosemite doesn't allow boondocking. Yosemite is only twenty-five miles, away so I'll be there early in the morning. Can't wait to check it out.Time to cook some dinner, having hot dogs and beans, an old camp favorite."

What with snow, September, and passes closing, Doug arrived at Yosemite. Reaching the national park, he found "lots of snow in the higher elevation" and too many people. He wanted to hike the John Muir Trail and Half Dome, but the traffic was so bad that he couldn't even get to that part of the park. Visitors had to be picked through a lottery to hike the Half Dome. "I lost. Can't win them all. The park was beautiful, though."

Doug had arrived at the national park just after landslides in the park had caused fatalities. He posted to his family and friends that he was in Yosemite and safe, yet feeling "sorry for the families of the dead and injured in the landslide."


Continuing with his routine of traveling and then hiking an area, Doug hiked through Mono Pass to see Mono Lake. "My highest hike to date, 10,600 ft," he said. "What a difference it was from one side of the pass to the other!"


On his way to King's Canyon, Doug stopped in Fresno, California, to buy new tires for the trailer. "I've traveled over 10,000 miles already."


Doug managed to get both his hiking tand tiny trailer sight-seeing in as he continued south toward San Diego to meet with family. He especially enjoyed the tunnel tree and the climb up on Moro Rock at Sequoia National Park.


Arriving at San Diego, Doug met with family and was treated to an Octoberfest concert, which he enjoyed immensely; however, he realized that the Las Vegas shooting incident was on everyone's mind. He saw that "SWAT vehicles and teams were on every ridge, drones and helicopters flying around thru the whole event. Security was tight, but I still think they couldn't prevent an attack if someone wanted to. You can't let that keep us from our freedom to get on with life." Putting his thoughts and feelings into action, Doug was "down in the front, dancing with the masses till the very end. Foo Fighters, Cage the Elephant, and Queens of the Stone Age were great."


Soon after the concert, Doug took I-8 out of San Diego, heading home. On October 9 he took off, and by the 13th he was home, with many hours on the road. He still managed to find some interesting sights and experiences along the way, especially at the Mexican border and at the Petrified Forest. Mostly, though, he hunkered down and put the last miles behind him.

Before leaving San Diego, Doug had posted on Facebook the following: "Getting homesick and with snow starting already in the mountains, it's probably not a bad idea [to head home]. I had a great time, saw a lot of parks and places I've never been before. Five months on the road, living out of my teardrop, is a long time. I didn't get to do everything I wanted to, but there's always next year."

Upon arriving home, Doug had to deal with a dead refrigerator, a toilet that didn't work, and a satellite TV foul-up, but it was still good to be home. "Well! Home Sweet Home to get to some yardwork. NO, I really mean it, and it sure needs it!"

Balance is an important part of life, and Doug's trip exemplies it. Happy to be alone, happy to be with family. Happy to be on the road, happy to be home. Doug must realize that "home" is as much a state of mind as a place. He certainly had a great trip--and, oh yes--he did get the refrigerator and toilet fixed. "Easy fixes," Doug said. "Back to normal, if that's possible." Normal is certainly possible with Doug, and after five months of living in such an immense backyard, what's a little yardwork?


(Note: As the content for Green Goddess Glamping evolves, sometimes content focus will dictate that articles will be posted on some Facebook groups and not others. Articles on Dutch oven cooking, portable toilets, or bicycle day rides, for instance, could find posts in different groups. The best way to ensure that you are receiving all articles is to subscribe to follow this blog by email notifications.)
at August 02, 2019