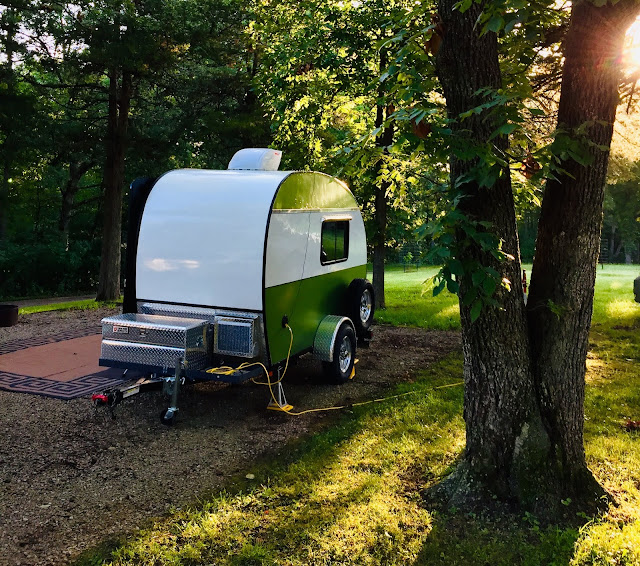 My latest camping trip could be considered a comedy of errors or the weird humor of the powers that be. What began as a 6-night camping trip with my wife--a reserved site and everything--ended up a 3-nighter by myself. What caused this shift in plans? How about a dangerous heat wave, our daughter and grandson's bad cold, a maybe-early/maybe-delayed Fed Ex shipment that needed a signature, and 12,000 bicyclists showing up in town for RAGBRAI? You know, the usual.

Finally I headed out of town to Lacey-Keosauqua State Park in SE Iowa, about twenty-five miles from our home. My wife and I had camped there about four years ago with our kids and grandkids, and I'd camped there a couple of times while passing through the area while bicycle camping, but we had never camped there with our tiny trailer. 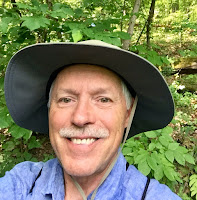 A few weekends ago we took a Sunday drive to the campground to see what it looked like. Last year the park was closed for repairs and upgrades to the campsites. We were afraid the campground had been "modernized" like some--with a bulldozer to create the tract home, "Sewer Alley" look. Thank goodness that hadn't happened. Sewer had been upgraded, and a few more sites had been added to that area of the campground. On the non-sewer side, some tent sites had been converted to electric, and some of the old electric sites had been modified as pull-through sites rather than back-in. These modifications hadn't changed the feel of the campground, though.

Arriving around noon during the third day of our six-night reservation, I quickly set up camp, leaving the awning for Monday morning because a thunderstorm was forecast for that night. My main task for Sunday afternoon was to test the cellphone receptivity with and without our WeBoost signal amplifier. The signal was strong enough for Facetime (our hands-on signal strength test) and was stronger/faster with the WeBoost.

Yep, it was a nice rain that night, and Monday morning I put up the awning and then went for a walk. There is a path around the lake, for hiking only. I followed it for a while but decided to circle the lake early the next morning when it was cooler. Deciding to make Monday a rest day, I cooked myself a good lunch and then mostly relaxed and read after publishing a blog post about the recent heat wave. I didn't need the air conditioning on Monday, the fans being sufficient, and that night slept with the door closed and the fans off, with a low of 59 degrees.

During the night I had an interesting experience, a type I'd heard about but which had never happened to me. A rustling noise outside woke me, and I realized it was a raccoon, fiddling with the ice boxes. I yelled out the window to scare it off and then opened the door and turned on the outside light. There was no raccoon, but one ice box was open. The Yeti was safe and sound, but our cheap-o little Playmate box with a rotating roof-like lid was open. Yikes, I'd been burgled by a genius raccoon! It had actually pressed the unlock button on the handle and then rotated the lid till the box was open. Luckily, no essential food was inside. I had brought the smaller, less efficient box only to keep a couple of sodas, some cut watermelon, and some red grapes; I had transferred the remaining melon, grapes, and one soda to the Yeti before retiring for the night. That pesky raccoon did steal a potato I had baked at lunch that I was keeping for home fries the next morning, though. All that was left in the box were some muddy paw prints. Live and learn! 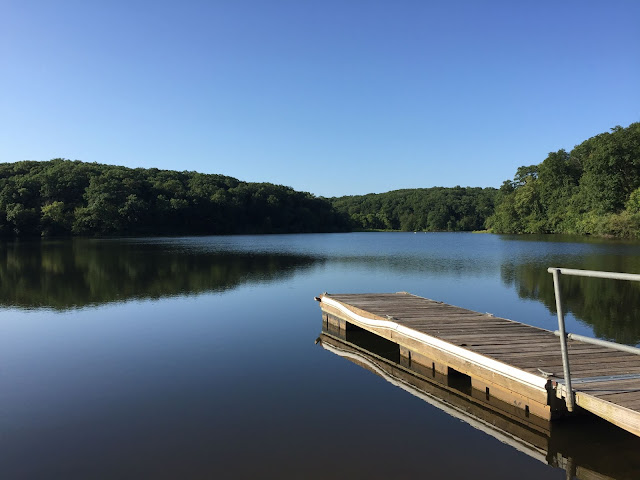 The next morning I was up early to take my walk, heading out at 7:45. The 2.1-mile trail around the lake was more primitive than the bicycle trails I usually ride--washed out in places, corrugated with roots and erosion, sometimes just a single track because of encroaching plants. I liked it, though. Lacey-Keosauqua is the second-oldest state park in Iowa, and in places the trail moved away from the lake and wound its way through stately trees and silent forest, providing a glimpse of what the terrain must have looked like before the arrival of plows. The path was very much for hiking only, much of it not bicycle accessible; in fact, bicycles are not allowed on the trail, probably for safety issues and also to lessen erosion. 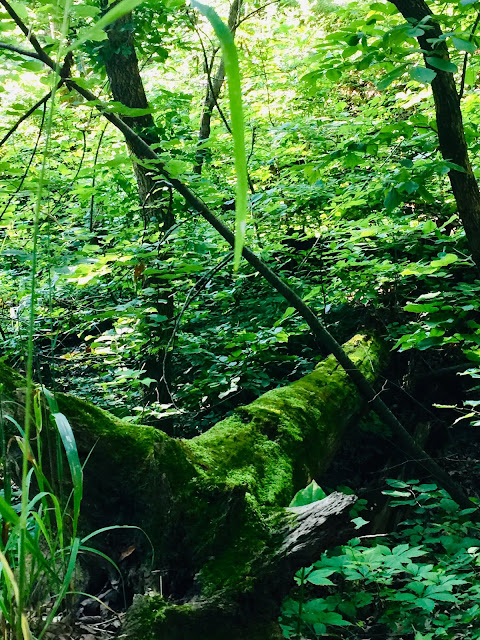 Prior to my hike, I talked a bit to two motorcyclists who had set up their small tents and camped for the night. They were about my age--retirement age--and were having fun but weren't "let's tour the world" enthusiasts. We talked pannier camping--both bicycle and motor style--and I continued on my way to the trail. There is a tent-only primitive section in the campground near one trailhead to the lake trail. A car was parked at one campsite but no tent. I saw on closer examination as I walked by that two hammocks had been strung and that the occupants were still asleep. I walked by softly, glad for the campers that it had been cool enough to keep the mosquitoes down some, although I bet they had doped up with repellant prior to sleeping. 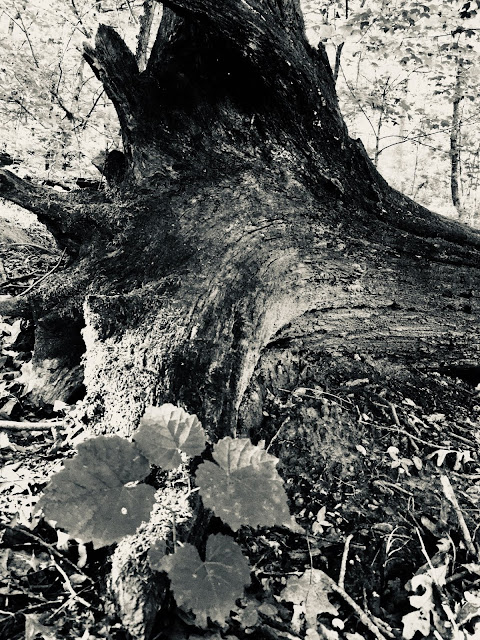 Walking the trail took an hour and twenty minutes, which included a lot of stops for enjoying the views and for taking photographs. One somewhat new experience in walking the trail was that I had to pay more attention to where I put my feet. If I were to have gawked too much, I would probably have fallen and possibly twisted an ankle--there were that many roots, stones, and uneven surfaces. I really enjoyed the experience, though. Have I really become that accustomed to flat, constructed walkways? I guess so! Walking the circuit also presented evidence of CCC and WPA construction that took place during the Great Depression. There is a bathhouse, stair systems, and several stone bridges along the trail's length. Different times and old construction methods built those structures to last--as they have. 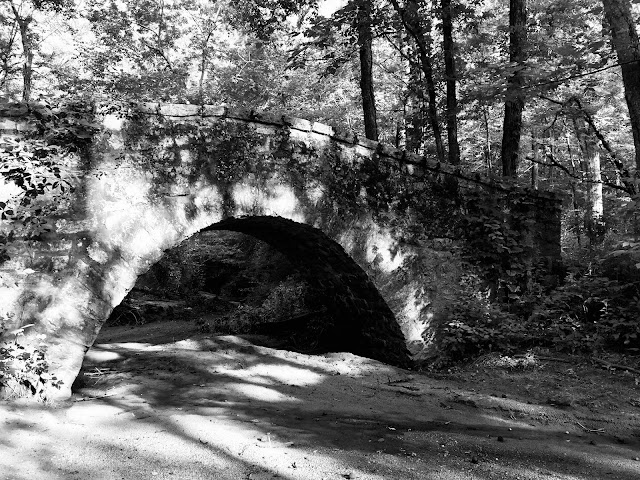 After enjoying a cool night of sleeping with the vent, windows, and screen door for ventilation (but no fans), I woke up deciding to hike the lake trail again, even though it was the day to leave for home. I decided this time I'd have a more vigorous pace for exercise, taking fewer photographs. This cut twenty minutes off my hike to just an hour. I did stop to take a few photos, of course, but it was also good to try focusing more on the physicality of the hiking. It was a beautiful morning, though, so I certainly enjoyed the hike and didn't get all huffy and puffy in the cool of the early morning. 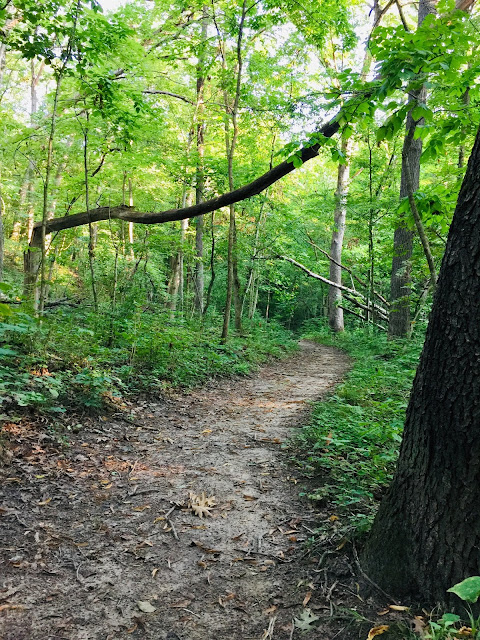 Arriving back at camp, I cooked myself a good breakfast, cleaned up camp a bit. I had dropped and put away the awning last night, so after breakfast I wrote some to finish this post, selecting photos and deciding at what point to finish this post's narrative. I think now's a good time. We're all familiar with the packing and hitching. It's been a pleasant time--in the best sense of the word--peaceful and relaxing.

Good news! Arriving home, my wife and I have reserved four nights next week at the same site. 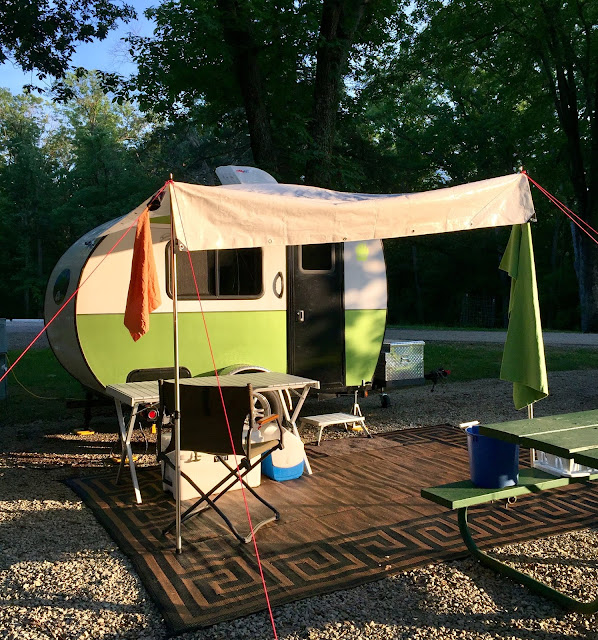 I hope you've all found a nice spot to camp and relax after the heat spell. Having a quiet adventure isn't all that bad!


(Note: As the content for Green Goddess Glamping evolves, sometimes content focus will dictate that articles will be posted on some Facebook groups and not others. Articles on Dutch oven cooking, portable toilets, or bicycle day rides, for instance, could find posts in different groups. The best way to ensure that you are receiving all articles is to subscribe to follow this blog by email notifications.)
at July 25, 2019