All About Tiny Trailer "Gramping" with the Grandkids 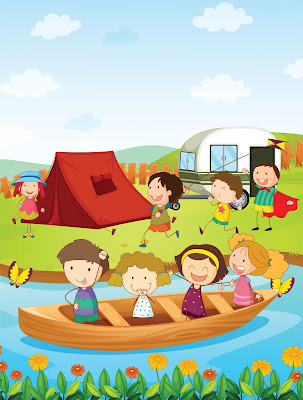 I'm a little tired, so I tell my four-year-old granddaughter that I'm going to take a nap in the bedroom. She says, "I'll take one with you!" I'm sure you see how this is going to go down . . .

We head into the bedroom, I cover my granddaughter with a little throw, myself with another, and then I close my eyes. The granddaughter gets up to do something and then comes and lies back down. We close our eyes. Granddaughter gets a book. Eyes close. Gets a doll and tucks her in. It's about then that I decide to count to myself the seconds when she actually is lying down--yep, never longer than fifteen seconds.

How does this apply to tiny trailer camping? Well, my wife and I have decided we want to take the grandkids "gramping" with us, but we're not exactly sure how it's going to work with two kids, four and six years old, and a tiny trailer that sleeps two.

This new term "gramping" from "grandparents camping with grandkids," is all about providing an opportunity for "skip-gen" family members bonding while providing time for parents to take a break from parenting responsibilities. This new term is known as a "portmanteau," a combining of two word sounds to make a new word (think how motor and hotel became motel a "motor hotel"). Camping with grandchildren is, of course, not something new. Grandkids have been visiting--and camping--with grandparents since, probably, forever.

However, since the Baby Boom generation is retiring in record numbers and hitting the travel recreation trail, we also now have gramping as a clever deviation from another popular term--glamping, "glamorous camping." From my research, it appears a number of the articles on gramping reference the online Boomer magazine's article, "Skip-Gen Travel: Bonding with Grandkids on the Road."

Since my wife and I are trying to figure out how to camp in a tiny trailer with two grandchildren, I decided to solicit advice from a Facebook tiny trailer group regarding small spaces and small kids. I'm glad I did because I received some solid, helpful suggestions, most of them involving two possibilities: tents or van/SUV beds.

Adding a tent to the tiny camping experience involved three possibilities:
Several group members mentioned using roof tents. I've seen some awesome examples of roof tents both online and at campgrounds. They get you off the ground and provide a stable platform. Sandy and I aren't going to be camping enough with the grandkids, right now, for this kind of investment, although it would certainly add to our camping potential.

Side tents are a viable addition to tiny trailer camping, especially with the smaller trailers. One group respondent (parents, not grandparents) said: "We have a side tent that attaches to the side of the trailer. Our boys are five and three, and they either sleep on an air mattress or we bring cots." Another group member posted photos of the solution they used when their grandkids were younger: "When ours were younger we used an SUV tent meant for the rear of an SUV and attached to the tear. Worked perfect." Below two photos show what their set-up looked like.

The easiest and quickest solution is for us to include a conventional tent to our campsite. Not being connected to the trailer means that if young kids sleep in the tent, at least one grandparent will also be tenting it. "Young backs conform to the ground better than old backs," was one comment. Another provided more detail: "I have a big tent we all sleep in. I also have a cot and pull my mattress out of the teardrop to put on it." Just moving into a tent for a while could be the solution.

My wife and I bought our tiny trailer to get away from tenting, but that doesn't mean we didn't like the tenting experience--when conditions were optimal. Actually, we own a really great tent, a Big Agnes Big House, which would hold all of us. We might just tent camp with the grandkids and keep our standy set up as the dining room/extra room (or a haven for bad weather).

The utilization of our SUV as a second sleeping space is also an interesting option, especially since we have a sunroof that opens. If I could cover that opening and one window with netting to bug-proof the vehicle, then I could sleep there while grandma and the kids sleep in the trailer. I'll have to check out the space and flatness of the dropped seats. As one gramper said, "I sleep in the suv. With pads in the back end," another adding, "We have a foam fold-out bed in the van. It's delightful. Husband and grandson in the teardrop."

Other suggestions were for grandpa and grandma to split up with the sleeping arrangements, each taking one child. The other obvious suggestion would be to just take one grandkid camping at a time. Two adults and a kid could be managed in our teardrop, or if more than one kid, the solution could be what one grandpa stated: "Grandpa sleeps in his tent. The princesses, I mean granddaughters, get the teardrop."

Beside how to house the grandkids when camping, the gramping articles online also suggest what grandparents need to remind themselves in order for the camping experience to be fun for everyone. We don't want grandpa and grandma getting too tired or the grandkids getting too bored!

Gramping Considerations
I would add a few ideas of my own. One would be prior to the trip discuss electronics--when, where, and how often. You can't get to know one another if the attention is always on the electronic devices. However, those devices are a part of the kids' lives, so maybe work together on making a video documentary of that trip to the zoo or having them teach you a game, something like that. Electronics also can provide the kids with some private diversion and a little down time for the grandparents. Another suggestion would be to have a good idea of the cooking menu--both favorite foods and maybe some new introductions. And let the kids help cook in some way. Remember, kids like to do stuff, not just watch. Finally, pay attention to the kids' energy levels and to your own. People get grumpy when they're tired. Be willing to adjust schedules to fit energy and interest levels.

Whether it's hotels, ocean cruises, tents, big RVs, or tiny trailers, grandparents are taking their grandkids on great adventures. Tiny trailers provide some space limitation challenges for adventurers; however, solutions are available so that you can have a great time gramping, no matter what the exact configuration of your campsite.

And if you're planning on having available some movies to share that are great for both adults and kids, I like the Shrek movies, and I've also heard that the Toy Story movies are great. I'm sure you have your own ideas, though, and if by some chance you don't--just ask the kids.

(Note: As the content for Green Goddess Glamping evolves, sometimes content focus will dictate that articles will be posted on some Facebook groups and not others. For instance, a specialized utilitent article may not be posted on a campfire cooking page. The best way to ensure that you are receiving all articles is to subscribe to follow this blog by email notifications.)
at June 18, 2019