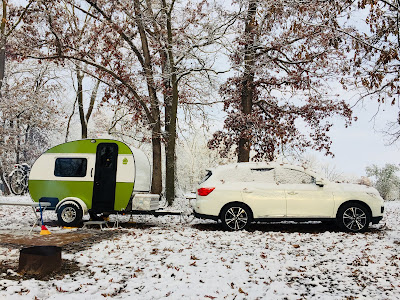 On November 3, I was at Bentonsport, November 7 at Indian Lake. In between, I came home to caulk a leak in the trailer and to take my wife to the airport for a trip to the West Coast. By 3:30 in the afternoon, I was sitting by the campfire, dodging smoke blown by a west wind and enjoying the warmth of the fire as the day slowly slipped to dusk. Sitting by the campfire and enjoying the warmth was a regular activity during my stay that extended to four nights.

The high for the day had been 46 degrees, and the low for the next morning was forecast to be 26. The Indian Lake campground was winter ready, with the showers and flush toilets closed and chemical toilets made available. Water and electricity still flowed, and I was parked at the far end of the campground, where I'd never camped before when tent camping. Leaves covered the gravel, and the leaf fall opened up the view to the lake. The spot was really quite nice--privacy because of the time of year, leaves beautifying the gravel-beneath-the-trees sites, and the chemical toilet very clean and odorless (thanks to the cold weather). The only inconvenience was that I had to walk about two hundred yards to fill the water bucket. Paper plates lessened this inconvenience, though, since I had brought my drinking and cooking water. I dumped whatever water was left in the wash bucket at the end of the day so that it wouldn't freeze. 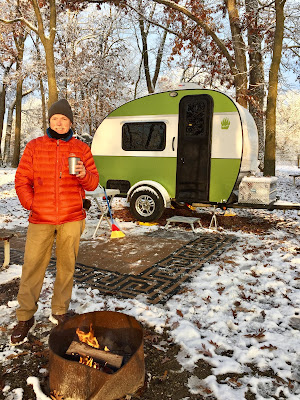 Drinking water and dry food were stored in the trailer, along with yams and potatoes so that they wouldn't freeze. Two coolers were kept in the car, one for items such as milk and cheese, and the other smaller (and cheaper) icebox holding vegetables: asparagus, zucchini, broccoli, Brussels sprouts, and kale. This arrangement was fine at twenty-six degrees, but when the temperature dropped to fourteen degrees, the asparagus and zucchini had to be thrown out because it had frozen. All the brassicas were okay, though. After the fifteen-degree night, though, I kept the remaining fresh vegetables in the cooler and inside the trailer during the nights, stashed in the space below the bed. Or, to use alliteration, I did this to keep fresh food from freezing.

On the coldest night I was a little nervous since I was still exploring and testing the capabilities of the trailer. That night I spread an opened a Coleman cotton sleeping bag over my down bag, and this really added to the warmth. I also had researched the Pelonis oil space heater that was the trailer's heat source. It has three Watt settings: 600, 900, and 1,500. For most of the night I used the 900 setting, which provided enough heat radiance to keep up with the cold; at one point I lowered the setting to 600 Watts. The roof vent was cracked open a bit, and one window. I wondered what I'd do if the electricity went off, then realized that I could always get in the car, start the engine, and enjoy the heater. I'm also going to research a small propane heater for emergencies. Although I'm not crazy about the quality of the air that would probably produce, for getting through a night without freezing, it seems like a good fallback possibility. Let me explain my reluctance to use a propane heater in my tiny trailer. Although there are standards for air quality and also units have an automatic shutoff to stop asphyxiation, I still question such units as being the healthiest option. 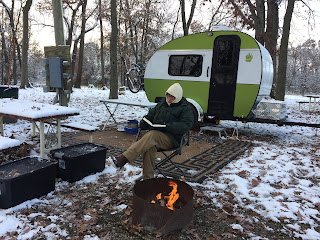 Writing in my daybook was a pleasant task each day, although writing in gloves was somewhat challenging. The cold wind, though, was sufficient motivation for me to adapt. I was able to write, enjoy the fire, and look beyond the fire to the muted panorama of the leafless trees and the gray, wind-rippled waters of the lake. The pale blue sky and the steel gray water, the dark silhouettes of the trees still holding a few rust-red leaves were contrasted by bright green grass that fringed the south cove of the lake that was fronted by a wide meadow. Many of the ideas for this blog post were first written into my daybook, sitting by the fire, a cup of tea nearby.

I arrived on Wednesday afternoon and stayed until  Sunday afternoon. Originally, I had planned to return home on Monday but family plans shortened my stay by one night. Two inches of snow arrived on Friday, flurries with winds. Yes, fall camping all right, and many new experiences! I enjoyed experimenting more with cooking inside the Green Goddess, or cooking outside with the induction burner, which is not bothered by a wind. My favorite dish this trip was baked vegetables and feta cheese, cooked with olive oil and a Herbs de Provence seasoning mixture. I cooked this three out of the four days (and one of those three days inside the trailer). 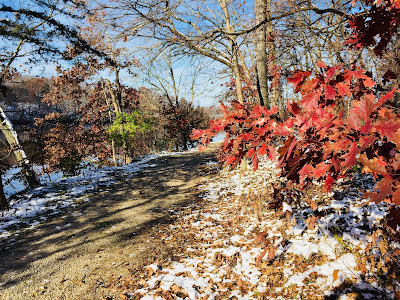 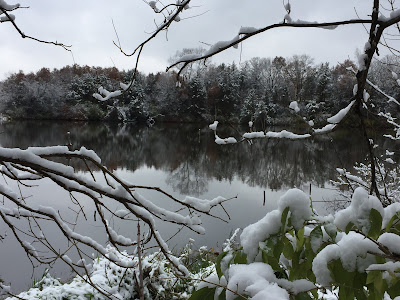 My favorite activity on this trip was the lake trail that goes around the lake. On Thursday, I rode the trail on my bike, walking those portions where trail steepness and slick leaves prompted caution. The next three days I walked the trail, taking photos and just enjoying the quiet of the lake and the trees.


One interesting insight from this trip was how I became more used to the colder temperatures. Of course I dressed warmly, but I found myself outside in temperatures in the 20's and perfectly comfortable, just enjoying the wind in the trees and the falling snow, just enjoying how the morning after the snow the blue sky and was such a wonderful contrast to the snow quilting the land. Usually I enjoy riding my bicycle, but this trip I especially enjoyed walking. The movement felt good, and although it's hard to imagine, walking was even more in-the-moment in terms of interacting with the environment. It's easy with biking to become absorbed with the physical act of riding the bike--spinning, pumping up a hill, shifting the gears. Walking requires much less attention--I just had to make sure I didn't slip on the snow-covered leaves on the steep portions of the trail!

I think the last few camping experiences I've had validate my opinion that weekday and off-season camping allow for more interaction with nature because there are fewer campers sharing the campground with you. The other side of that coin is that if you enjoy social interaction and meeting other campers, then camp on the weekends and during the summer vacation season! Neither quiet nor community is more right than the other; they just fulfill different needs and expectations. For me, right now, I enjoy finding a way to let nature be more to the forefront. 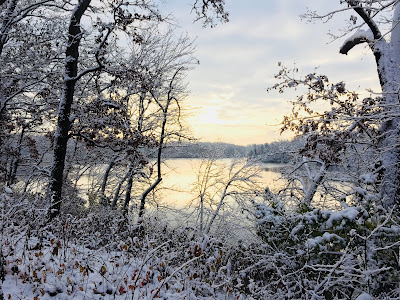 I am home now from my trip, enjoying some time with my wife. We'll see if schedule and weather allow us to get out any more this season. I have a couple of other leaks to fix in the trailer, which my carpenter son-in-law will help with. I will also buy a tarp for covering the trailer. Whether it remains covered for days, weeks, or a few months is a wonderful source of speculation for my wife and me. 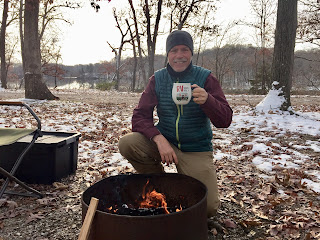