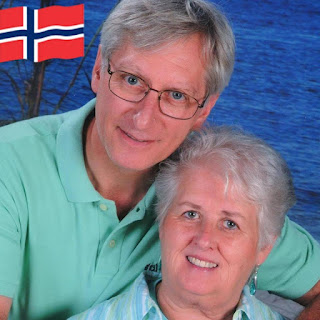 South Carolina may be the homebase for their travels, but Jo and John Fesler haven't let themselves gather too much SC dust since they've retired. Since 2015 they've taken two trips across the US of about three months each, and have also taken additional trips to Ohio and Tennessee. Their travel rig is a Rustic Trail Teardrop Campers (RTTC) Pappa Bear (RTTC's smallest model), which they pull with a Toyota Sienna van. "We have had no problems towing our camper and we have pulled it over 20,000 miles!"

The Feslers have owned their Pappa Bear for three years, buying it after researching several different brands. What attracted them to the Pappa Bear was its price and the teardrop's design--it has some floor and counter space, whereas for many of the others they looked at, "You just had to crawl in onto the bed." Their earlier camping experience had been tent camping from over forty years ago when their kids were small. "My husband John was ready to retire, and we were planning a cross country trip.  We thought we might try tent camping along the way.  We bought a tent, went on one short overnight trip to try it out, and decided that was for younger people (and of course it rained on that one trip)!  We started looking around at teardrops and discovered that was the perfect option for us." 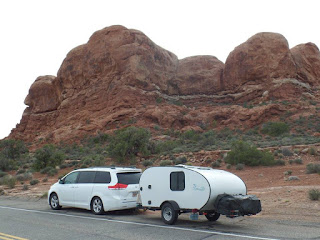 The Feslers have traveled with their teardrop on many trips, which if added up would come to about seven months on the road. "We mostly like to travel fall until spring and usually not much in the summer when it is too hot." During their two trips across the country from one coast to the other, they have spent the night in quite a few different kinds of places. "When we are traveling, sometimes we will just stop at a WalMart (checking the ONP App - WalMart Overnight Parking) for a safe and accepted WalMart location where we can just stop along the way, get a good night's sleep and move on in the morning.  We have probably stayed at a WalMart 30 times or so on our trips.  It's quick, no set up involved, no unhooking and we're back on the road first thing in the morning.  We have done the same thing a few times at casinos - another location that you can safely park at for free.  We normally stay at a campground when we reach a destination we want to stay at, normally for only 2-3 days, see the sites and on to the next spot.  We've stayed at KOA's, state parks, Army Corps of Engineers, and also many Passport America campsites that we stay at for 50% off.  Some of those have been excellent for very low cost.  We've also stayed at some private homes using Boondockers Welcome - another camping membership group that lets you camp on their property. We've met some really nice people with Boondockers Welcome."

One adventure they experienced was in Grand Junction, Colorado, where they were snowed in for three days and then "had a harrowing 50 mile drive over the mountain in dicey conditions until we got to Albuquerque, New Mexico." After being stuck in Grand Junction for three days, they thought they had already passed the worst of the snow but discovered they should have stayed for another day or two. "The coldest place in all of our travels was in Florida - we had temps of only 16 degrees!  We never expected that!  We got caught in a dust storm traveling through south Texas - another harrowing experience - we got 3 chips in our windshield from rocks on that ride!  One of our favorite things on the last cross country trip was when we parked our camper for a week and volunteered for the week between Christmas and New Year's to decorate a Rose Parade Float.  That was an involved and exhausting experience, and we stayed in a hotel for that week and picked up our camper after the week was over (and we attended the Rose Parade on New Year's Day in Pasadena)!  Another really memorable trip was travelling Route 66 from Miami, Oklahoma, all the way to Santa Monica, California, staying as much as possible on the actual Route 66 road, travelling through all the small towns on that route, and many of the iconic sites on Route 66!"

There are a few modifications the Feslers have made to their trailer which have made their adventures more enjoyable. "We added a solar panel to the roof of our teardrop and a Gel Battery to store the power.  That has allowed us to stay at places along the way without power.  We have added a microwave, induction burner, coffee maker and tv and dvd player in our small teardrop. The TV and DVD are nice when we park at a WalMart and we can crawl in and watch a movie before falling asleep.  We also added some graphic decals in teal blue to the sides of our camper, and painted the fenders and front rack the same color, plus added moon hubcaps for a real vintage look."

As you can imagine, when traveling in a teardrop for such long distances and time, two people traveling together will either learn how to spend that time well . . . or will stop traveling! Here's some advice the Feslers learned from their travels. "Buy an induction burner as an added cooking option - we've even used ours cooking inside the camper during bad weather (really important when you're on the road for several months because it does rain and snow sometimes (many days at a time even...).  We have a foam bath rug on the floor at the door which makes it easier to crawl into the camper (soft on the knees) and keeps the floor cleaner.  Understand that a teardrop is small so you have to be willing to adapt to being in a very small space.  You also have to get along great with your spouse, being in such tight quarters.  A teardrop is much easier to tow and can get into areas that you can't with a larger trailer.  Plan your trip so you know in advance what you want to see, but don't be real rigid so you can also wander and explore, or even change direction along the way. We never had campground reservations along the way and just played it by ear, often calling or looking online for campgrounds to stay at for the night.  What's nice about a teardrop is that it is so simple to park and set up - we have watched people with big campers spend lots of time getting parked and going through all their set up, leveling, hookups etc.  We are usually parked and set up, hooked to electric, all in about 10 minutes." 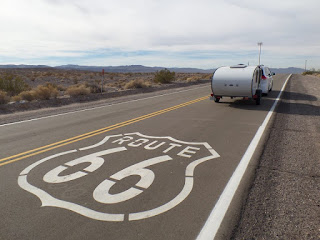 As successful veterans of the road trip, the Feslers plan this fall to finish their Route 66 trip from Miami, Oklahoma, to Chicago.  Traveling across the country through the northern states all the way to Washington state is definitely on their list. In 2019 they plan to make a trip up the east coast to New England to view the fall leaves. The Feslers are living the life that many just dream about. We wish them many more happy miles. A video slide show of their travels is posted on Facebook.