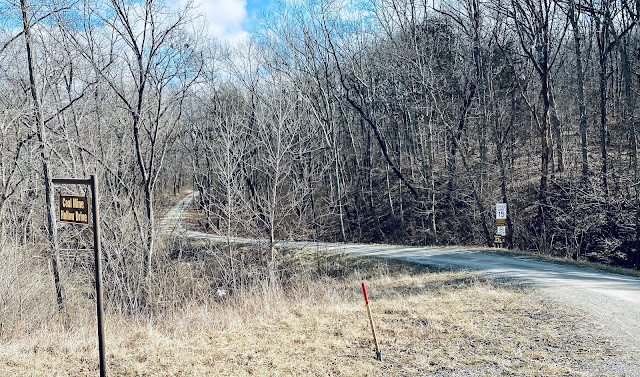 While on my way by bicycle to Bitternut Lake Campground in Shimek State Forest in southeast Iowa, I bypassed a gravel road peeling off and down to my right, down to shadows and frozen shelves of snow, the road narrow and wet from the thaw as it descended, curving and disappearing behind a line of bare-limbed trees. To the left of the descending gravel was a small sign: "Coal Mine Hollow Drive." That was intriguing because there are coal deposits and old mines in Iowa . . . and, of course, any geographic designation that includes the word "hollow" is imbibed with a good dose of mystery. To the right of the turnoff were other signs: "Caution Road Is Not Serviced," a 15 mph sign, and a sign indicating the forest area allowed hunting. All in all, that road leading down and off around the bend around the ridgeline was a big poke at my curiosity. I had just discovered part of my route for the next day's explorations.

I'm not a real explorer, not like some folks. I enjoy staying home and working in my garden, happy as a hobbit. I'm also not big on charging off down unimproved roads in my car, pulling my camping trailer. I've heard too many stories of the person who had to back a couple of miles on a narrow one-lane road before reaching a turn-around, or executing a thirty-point turn-around in a narrow spot, inching around while worrying about dropping off a narrow shoulder. Myself, I once drove to enter Iowa's Backbone State Park along a narrow, shoulderless road, only to find the entrance gated shut and padlocked. Luckily, there was a small turning circle and I was pulling my tiny trailer, the Green Goddess, so scooping the loop was easy. If I were pulling a 45-foot fifth-wheeler--well, I don't even want to think about it.

On a bicycle, though, I grow much bolder. I can go off-road if it's not too muddy--or even if it is too muddy, if the necessity dictates. I can jump off and walk with the bike, turn sharply and slalom through trees, pick the bike up and pack it--even fall down and then get up and continue on, which I've done a few times. When I stop and consider my route when on a bicycle, it's usually "How do I do this?" not the terror-stricken "OMG, what do I do now?" I've negotiated around (and over) fallen trees on trails, and the only times I've turned back to retrace my route have included flooding. Even with flooding, I plan to bring river shoes and a towel for some routes that will include water that isn't a raging torrent.

Before continuing on with the day's ride, I checked Google Maps and realized that my projected bicycle ride to White Oak Campground, another primitive campground in Shimek State Forest, could include a ride on Coal Mine Hollow Drive, which intersected with the route to White Oak. Therefore, my trip to the campground (a return trip) could include a new section of road. Wonderful! I continued on my way to Bitternut Lake with the happy knowledge that the next day's route was a go. 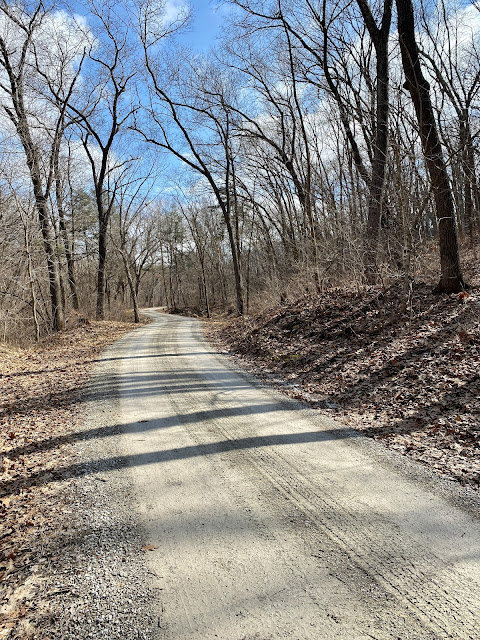 There's something about taking off on an unknown road or trail on a bicycle, and when I turned off down Coal Mine Hollow Drive the next morning, I was just thrilled to hear the crunch of gravel at the road's edge and the lean down into the hollow as I feathered the brakes to keep my speed down on the thawing gravel and mud--also, keeping my speed down kept the mud from flying up too much! The road quickly dropped and then climbed for a series of ridge crossings. I hopped off and walked, easier on the soft, thawing roadbed, and more enjoyable, too. The road was only a little over a mile in length, intersecting with Primrose Road, the improved gravel road that took me on to my day's destination, the primitive White Oak Campground.

Because Coal Mine Hollow Drive was only one and a tenth miles long, I walked most of the length, slowing down even more than my bicycle speed, savoring the quiet of the forest and the freshness of the forty-degrees air. I was in no hurry because the ride was my purpose, even though I had chosen a destination for the day. After a long winter (although the day and environment still had wintry aspects!), I was just enjoying the chance to move and see new territory. I would like at some point in the future to ask the local rangers if there indeed ever was a coal mine in the area. I want to ride the road sometime during the warmer season to see if there is more wildlife activity. However, I don't think I'll ride the trail during the hunting season, even wearing bright colors! 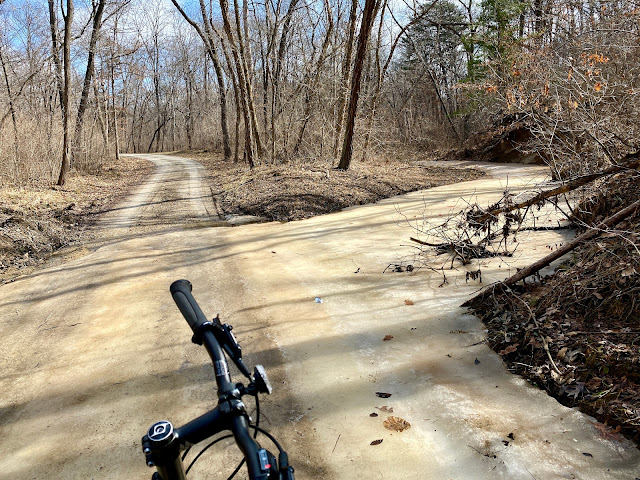 One interesting feature of the road was that streams were forded two times. The ford was a cement slab over which the water ran when the runoff was sufficient. On my trip on March 3, the creeks' runoff was frozen, so I didn't have to take off my shoes and wade to cross the creeks--just carefully traverse two slabs of ice. I imagine there are times just after big rains when the fords are impassable, and I definitely wouldn't want to be easing down the road with my Airstream Basecamp and then have to figure out how to turn around. Much easier with a bicycle! In the photo above, the stream flows downhill from the right, crossing the road almost at a right angle. Easy-peasy on a bike when the stream is frozen! I met only one vehicle while on the road--a Volvo station wagon, which would have been a perfect opportunity for Volvo to promote the rugged burliness of its brand. 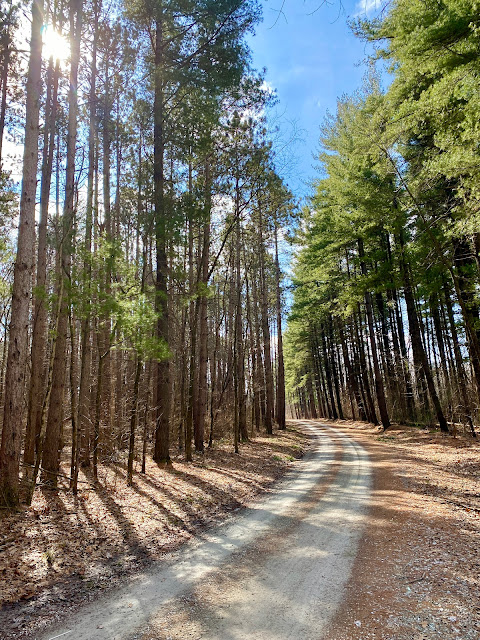 After crossing the two creeks, the road generally climbed up to its terminus with Primrose Road, moving from deciduous forest to conifers. Although conifers are not uncommon in Iowa, especially juniper, these tall pines were a treat, so I stopped several times to enjoy the sight and smell of the evergreens. I was hoping for the sight of some deer crashing through the underbrush, but no such luck on this day's ride. Most likely, the deer were more in the prairie areas where there was more sunlight and feed. I'd have to see when I reached the prairie area near my campground destination.Even though Coal Mine Hollow Drive through Shimek State Forest was a wonderful ride and walk, it's a small parcel of forest compared to the great national forests. However, I have to catch my enjoyment and moments in nature where I can, and my time on this short, undeveloped road was a pleasure--a day out on my bicycle in late winter, out among the trees and silence. When I arrived at Primrose Road, I happily continued on my way, passing farms with their outbuildings and barns, cattle lots where the steers gamboled with me alongside the fence, and browns and yellows of fallow fields awaiting spring. Those sights were enjoyable too, as was the continuing ride. However, I cherish that short excursion onto a new road, just soaking up the moments, a bit of quiet and a bit of nature--as always a reminder of the beauty of the world and the awakening world, quickening from its long winter.
at March 11, 2022