Once upon a time there was a couple who bought an Airstream Basecamp 16-footer. Their little joke to themselves was that it was their Christmas present since they had picked it up from the dealership just three days before Christmas. They towed it home, and there it sat in their driveway, plugged in to 110 to keep the batteries charged and the inside warm.

The challenge, though, was when could they use their wonderful, beautiful gift they had given themselves. Immediately after getting "Moondance" home, the temperatures dropped to the single digits, as low as one degree Fahrenheit one morning, the highs in the teens. "We can camp in these temperatures," Grandpa said, "but do we really want to?"

Mother Nature, the most kind and capricious of mothers, decided to be playful and conjured snow with warmer weather--but just before the snow and just after the deep-freeze weather . . . two days of sunshine with temperatures ranging from 15-35 degrees! A tiny weekend window of weather that was neither outstandingly cold nor outstandingly warm! Maybe we can even whisper, "Just right."

And so I bring to you a narrative of the first time my wife Sandy and I headed out in our brand new Airstream Basecamp, traveling to a local SE Iowa winter destination just seventeen miles from home. But before any traveling, we had to get our brand new (and empty) camper geared, stocked, and packed up.

Almost two months earlier, we had sold our tiny trailer, an RTTC "standy" Polar Bear, in preparation for the arrival of the Basecamp--yes, good-bye to the Green Goddess and hello to Moondance, a poignant experience. We emptied out all our gear from the tiny trailer and stored it in our spare bedroom . . . and waited.

Moving in was going to be easy, we thought. All our cooking gear was in a plastic travel bin, and all our food was usually stored in an identical bin. When traveling in the Polar Bear, the cookware had been stored beneath the bed, the food in the aisle. Arriving at the campsite, the cookware bin usually stayed on an outside table while the food bin sat beside it except for nights when it was stored in the SUV to discourage critters. We did find gearing up and stocking the Basecamp kitchen to be easy, but that doesn't mean it didn't require some thought. We found smaller plastic bins downstairs to use for the cabinet storage so gear and food wouldn't slide around during travel. We happily discovered that when "all things kitchen" were stored, we still had space and didn't have bags and bins getting in the way and tripping us up, as was apt to happen in the Polar Bear. Heaven!

For our bedding, we moved in the topper we had used for the Green Goddess, plus sheet, blanket, sleeping bags, and pillows. That turned out to be quite a pile which fit at the rear of the old standy pretty comfortably but was somewhat cumbersome for the Basecamp configuration--a big pile of stuff blocking the back door and dominating the space. We were willing to live with that for our first outing, knowing that the actual experience of living in the camper would provide us with insight. We stacked everything up in back and moved on with the packing.

Clothing was a bit of a concern--not our actual trip clothes because we were only camping for a night or two--but we weren't sure about the clothes storage solution for the Basecamp--beneath the seat bench or up in the storage racks? The overhead cargo storage areas aren't as big as they look in the photos, and the storage beneath the bench on the street side of the camper is awkward to access, especially with a large pile of bedding encroaching onto the bench cushion. For this trip we each just filled a medium-sized soft travel bag with a change of clothes, sleepwear, toiletries, and a few sundry. Easily accessing the bench storage space will take some time to figure out (and some kind of sticks to prop open the access lids), and the storage racks above the seats were filled with pillows and sleeping bags after our first night. We know an easier solution will manifest with more camp time.

Hitching Up and Taking Off

Our second tow with the Basecamp proved to be as easy as the first (our trip home from the dealership). Our Nissan Pathfinder pulls the unit easily, although now I can tell I'm towing something, whereas with the tiny trailer I mostly didn't even notice the weight behind. I've also found backing the trailer as easy as the smaller trailer, and I'm not talking about how backing tiny trailers is twitchy. What I mean is that even with the wider trailer, I'm still able to have a good sense of what's happening behind me as I back--and, of course, I'm always willing to stop, get out, and look. I have noticed that when hooking up I have to be more exact with my placement of the hitch ball. With the tiny trailer, I could rock the trailer and roll it a bit (rather than the hitch jack leg resting on a "foot" as the BC does, the RTTC Polar Bear had a wheel). This isn't a deal breaker, since I've gotten pretty good with alignment, but I'm glad I have the Pathfinder's rear camera.

Following the advice of our orientation technician at RV One, we left the propane tanks turned on with the heater set and the electricity on so the refrigerator would run. Evidently there is some controversy about leaving power on while traveling, but the technician's rationale was that the tanks have automatic safety shut-off valves, so why not keep the trailer's interior above freezing and the refrigerator cold? 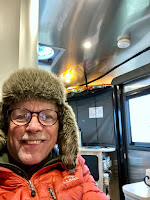 My wife and I were looking forward to staying in the camper. We knew we'd learn a lot about the unit just by spending time living in the space and interacting with the systems. Remember, our tiny trailer, although wired for 12v lighting and having 15 amp electrical hook-up capacity (really, just an extension cord), was really more a simple "hard-sided tent" . . . with a small homestyle window air conditioner mounted in the front. It was a huge step up from a tent, but the set-up and capabilities were still basic--which was part of its charm. Our new Basecamp is a quantum leap in capabilities, like the difference for math nerds between an abacus and a computing calculator. Even though we wouldn't be using any of the water systems for this trip, we would still have available the superior Truma heating system, the kitchen systems (stove, refrigerator, and prep and storage), and the lighting and USB outlets. Mostly, though, we were looking forward to experiencing the larger space. What would that be like?
What we discovered (and this is the topic of another blog article) is that Airstream camping is pretty much Airstream glamping. There, I said it! Green Goddess Glamping has finally got her glamping on. Let's look at a few specifics.


The bottom line is that we have learned that what attracted my wife and me to tiny trailer camping in the first place has not been lost with our acquisition of the Airstream Basecamp. The Basecamp's interior is more a liveable space than our tiny trailer, but it is still a small enough space that we will be engaged quite a bit in outside living. That outside engagement will be a little easier now, though, because we will be camping in a "little" trailer, not a "tiny" trailer. A few examples of how our camping lifestyle will remain the same, just "upgraded," seem pretty obvious to me at this point in time.
The main thing is that Airstream has designed the Basecamp as a small, self-sufficient unit. Everything we need is there. The big question for Sandy and me is this: How much time do we want to spend inside using the Basecamp's capabilities when we could be outside?

We left camp after only spending one night, leaving late Sunday afternoon after the wind had changed to the north and started spitting snow. We knew a major winter storm was arriving. Perhaps it was coming early? The state park had no cell receptivity, and we decided that since there were only a couple of hours of daylight left and we were planning on leaving early the next morning anyway, we'd just error on the side of caution and head on home. Having kept the trailer hitched to the rig, loading up was easy and quick. We were home safe before sundown, riding through some snow flurries on the way.
What a successful first trip out with "Moondance," our Airstream Basecamp 16! We learned so much about all those little changes and adaptations we intend to implement. Mostly, though, we just had fun, camping and hiking at the lake, cozy and warm on a short winter stay in our new trailer. It was a special experience taking that long walk along the lake on Saturday, taking a new trail and seeing some new territory. On the trip out, the wind hadn't turned frigid yet, so we just enjoyed the exercise and the views of the woods and the frozen lake. It was good to be out hiking beneath the stark colors of the winter sky, the frozen lake and the bare limbs of the trees painting their winter beauty, the cold, clean winter smells purifying and invigorating--and then arriving back home to our warm little trailer. I definitely think we'll do this again!
at January 01, 2021