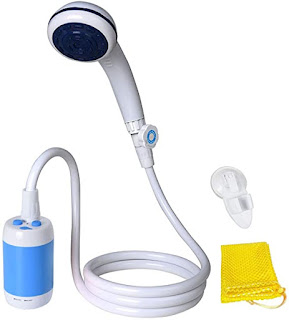 When COVID-19 hit this year, my wife and I decided to not use any campground amenities other than water and electricity. This meant that we had to use our portable toilet all the time and not just for nighttime visits. It also meant that we had to develop a procedure for bathing other than using the campground shower houses. We had already occasionally used a small plastic pan for sponge bathing, but with full-time self-sufficiency at the campground, we wanted to find a shower option.

After some online research of products and reviews, I finally decided to give the Iron Hammer Portable Electric Camping Shower a try. From the reviews I knew there was some risk involved with the product. The marketing on the product's box reads "More smaller -- More useful," as was mentioned in an Amazon review, so it was evident that this was not a product filtered through an American distributor. The instruction manual is also a bit difficult to read, although the meaning is discoverable: "When the product is fully charged, please dial the charging cable and the power adapter from the power outlet. Do not left the power adapter on the socket if not charge."

This product is produced by Shenzhenshi Lulutong Technology Company, Ltd., based in Guangdong, China. A Facebook page is listed but does not pull up when searched on Facebook. There is a Q & A link tab on the company's Laserbeak webpage at anygalaxy.com, but it doesn't load. There are international phone numbers and an email at this site. Checking the "Iron Hammer" link at Amazon, products associated with the words arose, but no clear contact links with the manufacturer. I'm mentioning this because if there is a product problem, communication would probably be . . . well, a slow boat to China. Such can be the vicissitudes of international commerce.

Although the Amazon reviews averaged 4.5 stars out of 5 with fifty-six ratings, there were a few warnings of weaknesses and failures. Thirteen percent of the reviews cited some problem with the unit: arriving broke or breaking within 6-18 months (1-3 stars). However, that means 87% reviews awarded 4-5 stars out of five.

Even some "4" ratings mentioned that there is no shut-off switch on the showerhead, although a water-flow valve is provided. As one reviewer mentioned, using the flow-stop valve stops the water but not the pump, though, which might damage the pump if maintained too long. I solved this by just reaching into my five-gallon bucket of water and turning off the switch located on the submersible pump. Some reviewers were annoyed by having to do this, but I found it easy to do. After all, my hand and arm were already wet!

I've used the unit regularly over this 2020 camping season, maybe ten times. When charged, the battery maintains the charge well. I'm camping for two weeks right now at a local state park, and when I went to shower yesterday, I realized that I hadn't charged the unit since my last camping trip about three weeks ago. There was still plenty of power, though.

I've used the shower in my Elephant Utilitent and also in a shower area I've rigged in my Clam Quick Set Escape shelter. I bought two five-gallon buckets with lids at Walmart for showering water. I only need one five-gallon bucket for a shower, but I bought the second bucket for my wife so she'll have plenty of water to wash her hair. Since the buckets slide one within the other, taking two doesn't take up any more room. This is a good time to mention that this unit pumps water but does not heat it.

Using a stainless steel canning pot to heat water (which also doubles as a rinse pot for dishes), usually I can go half and half with hot and cold water to get five gallons. One bucket with a lid is my shower seat, and the other bucket, of course, holds the water. Usually taking a shower means that I'll be turning the shower off and on about 4-6 times as I rinse, lather, and rinse, head to toes. I could use much less water, but since I'm not boondocking, I just use whatever's comfortable--but five gallons is plenty for me.

The unit has two speeds. I use the higher one, but the lower pump speed works okay, too. The unit charges via a USB connection. I have a little electric clock with USB plug-ins that I use in my tiny trailer. The pump comes with a little yellow plastic web bag for storage. I remove the showerhead and pump from the hose and store the hose in the bag. Everything, including the hose in the mesh bag, is stored in the original cardboard box, which is strong enough that it will probably last for a while. Be careful when detaching the showerhead and pump from the hose, though. There are two white plastic washers that would be easy to lose. The whole assembly can stay connected when stored if you like it quick and easy.

I'm happy with this unit. It does exactly what I want it to do, and it's pretty compact. I haven't had any problems with it, and hopefully it will hold up with use. I'm glad that with our portable toilet and shower unit, my wife and I can camp yet still maintain our zone of safety during this pandemic.
at October 13, 2020