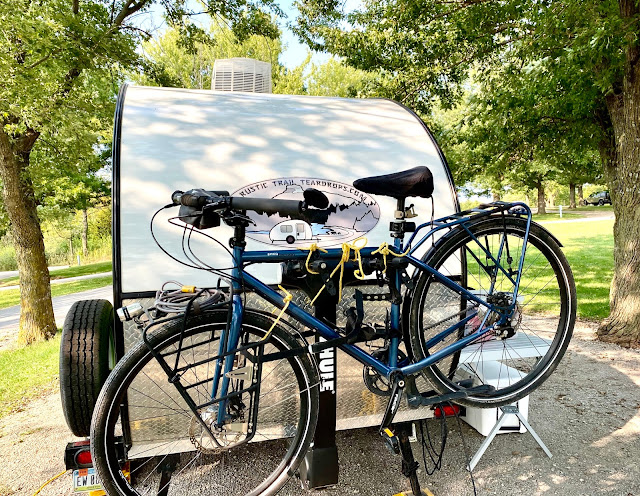 Two weeks of camping at one site--it seemed like a good idea to take my bicycle for exploring . . . and it was! After four days of rain and a lot of hunkering down, it was time to explore the area around Buck Creek Campground, taking my bicycle, which always provides a more personal connection with the environment than by car.

I'm writing this after three fun days of riding from my basecamp, and I imagine I'll have one more ride before I leave. My wife is coming for three days (Friday--Sunday), and I'm leaving on Tuesday--so I'm thinking, yeah, maybe Monday for one more ride.

Rathbun Lake and this Army Corps campground are somewhat odd from my experience in that there are no bike paths or hiking trails readily accessible from the campground. Most people seem to camp here for the fishing or for just hangin' at camp. I have walked along the shore, and that's nice, but the experience is more picking my way along shore, watching for tippy rocks that could turn an ankle or muddy spots. Still nice, though.

Exploring the bicycling opportunities really was a process of discovery, then--nothing obvious like a sign that says, "Multi-use Trail Starts Here." Seek and ye shall find, though, so I ventured forth boldly.

My first day of exploration was to check out the water egress area below the dam. There were two long, paved roads descending to the waterway at the bottom of the dam, and I was hoping that the roads extended along the water, off and away. What I discovered, though, was that the roads ended at a parking area. Footpaths continued along the water, but they weren't official and were narrow and rough. Later in the season I might have explored more, but I was in no mood to be tick and chigger bait so I passed. 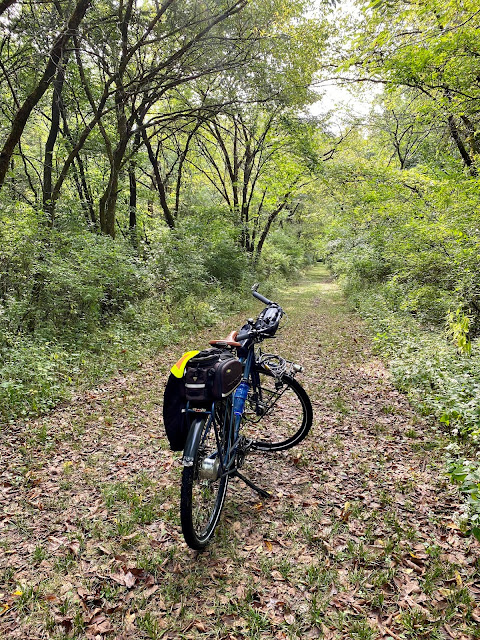 On my way to the spillway, I had seen an Iowa DNR designated trail, the Moffitt Ridge Nature Trail. From the road is was a mown pathway heading down the ridge. The ground was wet, but not so wet that I would get gumbo-gooey or beat up the trail too much, so I headed off, quickly out of the grassy meadow and into the trees. Traveling directly away from the road, the surroundings immediately became quieter and the view filled with green hues of the light filtering through the leaves of the overhanging trees. The descent continued on an on, later I determined it probably be just over a mile, and then brighter light reflecting off where a gravel road formed a portal in the greenery. I pushed my bike through the opening, having a "stargate moment." I was at the dead end of a farm road, the road ascending up to another ridge after crossing railroad tracks. 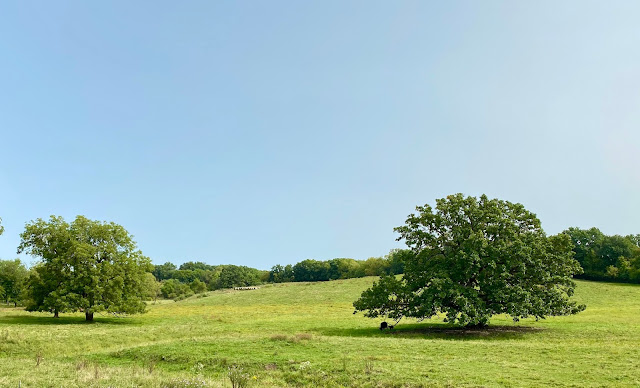 I looked at Google Maps, found my location, zoomed in and saw that the farm road merged with another, which looped back to the main highway. Great! I'd just discovered a four-mile loop ride that included county pavement, trail, and gravel. The beauty of bucolic Iowa opened before me: green meadows, oak trees, and cattle idling in the shade of the trees, looking up at me as I mounted my bike and pumped up the hill, having to stop while a freight train traveled through. The gravel farm road merged with another gravel road, Boyer Road, but the rural Iowa gravel vibe continued with a creosoted wooden bridge, a few farmhouses and barns, plenty of corn, and lots of scrub lining the road. Oh, yes, and no dogs, so I didn't have to negotiate my passage with any local canines. I arrived at home very happy with the ride. The spillway ride, added to the loop ride, provided a little more distance, and the exploring was fulfilling.

The second day of riding just included the loop, although I explored a continuation of the trail which headed up and away from the farm road. Probably the trail continued on to the DNR fish hatchery, a bit of a side trip I'd taken the day before when at the bottom of the dam. The hill up was steep, though, not too steep to climb, but the ground was still soft and my tire treads not aggressive enough for the conditions. I could have continued but felt myself just breaking traction now and then, and I felt it probably not the best for the trail for me to continue. Maybe I'll explore on my last ride!

The gravel was great, though, after I headed back down to the stargate, and the cattle were glad to see me, one even coming up to the fence. Being alone, I didn't mind exchanging a nod and friendly word. I could tell that my legs needed a more regular workout from how they felt today as I climbed the ridge to the main gravel road, but that's good, right? I continued on and back to camp, where I cooked myself a great potato and scrambled egg breakfast burrito for lunch.

One of the great conveniences of tiny trailer camping and taking day rides is that there's always the opportunity for great food and a soft bed after the ride. I've enjoyed by three- or four-day bike camping tours, but the food and bed are definitely better when it's day rides from a basecamp.

On the third day of riding, I wanted to go a longer distance but had a bit of a dilemma. The county roads, although not heavily traveled and the drivers uniformly considerate, had no real shoulders. The dam is a two-lane road with metal barriers on the sides, and the paved road drops off quickly to ditches or down steep hills. I decided to travel to Prairie View Campground, which is across the dam and three miles from camp. I'd ridden this before and enjoyed the ride and found that, as in my previous ride, weekday traffic is less than weekend traffic. Inside the Prairie View area, I wanted to explore a couple of side roads, but after the first side trek discovered that Indian Circle was not a looping road along the lake and then back up to the entrance road. No, the road descended to the lake, flipped a quick 360, and then it was back up the same road. A bit farther there was another "circle" route, but I decided I'd been there, done that.

After exploring Prairie View again and checking out possible campsites, I considered heading into the hamlet of Rathbun, two miles beyond the campground, but it was lunchtime, so I headed back to camp.

On my fourth and last day of bike riding, I waited till Monday after having spent the weekend with my wife. After exploring with her along the lake edge and taking a drive to check out the state park on the lake (rather than the Army Corps' campgrounds), I was ready for another ride. I decided not to do a road trek, though, because there seemed to be a bit more road traffic Monday morning.

I decided to take the loop route I'd discovered, but this time I'd explore the trail branch that took off back uphill, rather than easing out onto the farm road. The trail was much drier this time after a few more days without rain. I met a couple and their hound dog on the trail and asked them if the trail ended up at the fish hatchery. Yup, they said, so on I traveled. The route wasn't as long as I expected, and soon I was at the hatchery. 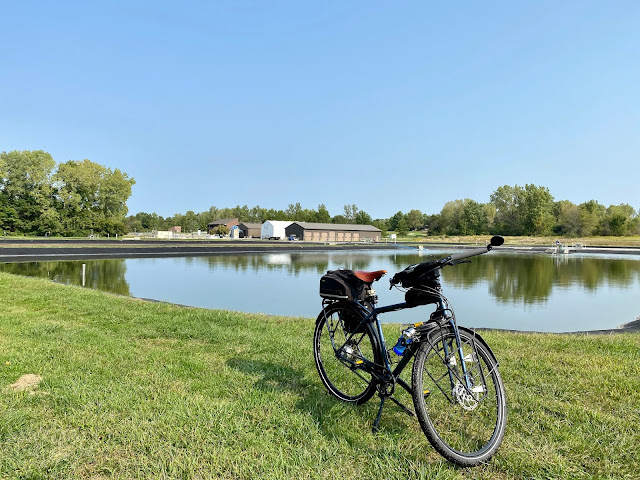 I was raised in Northern California in Oroville, a town on the edge of the Sierra Nevadas that has a salmon hatchery, so I was interested in checking out the operation. As I exited the trail, I pedaled over to the open ponds and cement tanks, looking around and snapping a few photos. After a bit, a DNR employee came over and told me I wasn't supposed to be on the premises, that it was for employees only. I had to take off. "I came out on the trail," I said, "and there wasn't any sign stating to stay away." I had to leave anyway and, of course, I did, but not without the parting comment that they should post a sign at the end of the trail.

I returned to the trail and followed the loop trail back to camp, enjoying another quiet ride on the gravel roads. It's always great to return to camp and my trailer for a shower and a great lunch. On this particular trip, I had to be creative to find a bike route that was fun, safe, and at least a bit of a challenge. The interest of this particular route was its variety, even though the route was only about four miles long. My side route to the hatchery added a bit of distance and novelty, but if I were to ride this route regularly for more exercise, I'd ride it two or more times.

I supposed the bottom line for Buck Creek Campground and the lake's marina, which is just a half mile away, is that if you want to enjoy the area, then get in the water. We've seen a lot of boats, from paddle boards and kayaks on up to pretty big sailing yachts. And then, of course, there are all the fisher folk. It will be interesting next year to find out if the Army Corps' Island View Campground has more trails, or if it also is a water-focused campground. Since it was late in the camping season, this sojourn only cost me $9 per day with my senior pass. A great price and, really, a great time.
at September 21, 2020