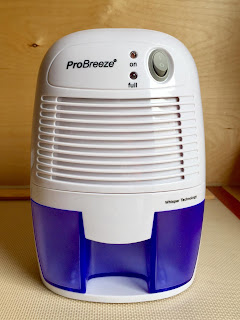 It's spring, it's been raining, it's been hot, and I think it's a good time to write about the little dehumidifier I use in my tiny standy trailer--the ProBreeze 1200 Cubic Feet (150 sq ft) Electric Mini Dehumidifier.

According to the product manufacturer's website, the ProBreeze 1200 is a "compact and energy-efficient dehumidifier quickly and effectively removes damp, mould and moisture from the air. It is ideal for use in small bedrooms or bathrooms at home that are prone to damp air, window condensation or spots of mould." The unit utilizes "peltier technology (thermo-electric cooling) instead of a compressor keeping noise to a minimum," and is described as having the capacity of removing "up to 9 ounces of moisture per day."

Before I describe my experience with the ProBreeze 1200, let me explain how I use it. Here in SE Iowa, it can get pretty humid, and one of my concerns as a tiny trailer owner is that while stored on my driveway, the 5x10 trailer will get stuffy and moldy from the humidty. That's why I use the ProBreeze, to keep the trailer drier while shut up and parked at home. I don't use it while out on a camping trip. I don't use it in cold weather because freezing temperatures stops the unit's functioning.

Right now with the weather having been almost 100% humidity for several days, I've found the little dehumidifier removes about four ounces of water a day--that's with the camper closed up and the only "leak" being the port for the extension cord for land power. It's not a lot, but the inside of the camper doesn't feel or smell damp. It fits my needs.

I haven't used the unit while camping because there is a small noise to the motor which would be annoying, I think, in the camper's confined space, especially at night. If I were busy during the day, it probably wouldn't be a big deal. Another reason that I haven't used the unit while camping is that with the door opening regularly and the ceiling vent open, I think the usefulness of the unit would be compromised. I don't think the unit would be a real deterrant against condensation. I think how much moisture our bodies would add to the enclosed space, plus extra moisture if cooking was involved, would overwhelm the unit. I mean, sure, it would help, but I think controlling condensation while living in the trailer would have to be mostly a matter of venting and avoiding adding moisture to the air during high humidity. For instance, not showering or not steaming vegetables when cooking would greatly lessen moisture accumulation.

One Amazon verified purchaser of the unit, Michael Cerda, addressed some of my concerns, saying that the unit can only extract water from the air if the temperature of the internal cooling plate is lower than the dew point, so the unit works best in warm, humid conditions rather than colder temperatures. He also added his experiences with the unit while camping.


"One thing to be aware of is air leaks in your room. If fresh water-laden air is continually introduced, you won't notice a difference. In our RV, I ran a vent fan that sucked fresh humid air from the outside. This machine could not keep up because we weren't recirculating the drier air, it went outside. For best results, keep your room sealed from outside air. I'm satisfied, the unit collects water and that's water not in my air."

Here are the positive points for the ProBreeze 1200.
Using the ProBreeze as one of a number of moisture reducing strategies when camping is a possibility--but one I haven't tried because my other strategies have been effective for reducing condensation in my trailer while camping. It's a nice-looking unit, though, and I always feel happy when I enter my stored camper and see the 500 ml water collection tank half full. Better the moisture in the tank than having it inside the camper and creating that "damp bathroom" feel to everything I touch.