Cold Weather Dash to the Badlands


Fall--and a fast-approaching winter--have sharpened my interest in cold weather camping. I'm still planning a December camp-out if the weather holds for a coupla-three days. It was the changing weather and the beautiful photographs posted by John D. Pappas on the Facebook group Rustic Trail Teardrops Camper Owners Group that made me decide to write this travelogue. It occured during cold weather, and it also was a destination journey--a quick trip from New Jersey to western South Dakota to visit his son that included a few sight-seeing stops. John hasn't given up on camping this cold season, though, as illustrated by his recent FB group post.


With SNOW in the immediate forecast, I'm starting to miss camping in the Bear Den! The fact is, I didn't purchase my Kodiak for it to sit idle under a cover or in a carport during the winter. I purchased it for the fact that I didn't have to winterize it or baby it like other RV owners. And so . . . I do feel that there is a need to camp . . . very soon!

I simply need to make sure I can pull it out of its spot near my driveway when the snow arrives, which apparently is in the immediate forecast! If I could camp from New Jersey to South Dakota and back this past month, ranging from temps in the mid-50s to the single digits, I can't think of a single reason I can't camp in it now.

I'd like to think there are other hearty RTTC owners willing to experience some winter camping in the northeastern portion of this country! Just need to find a campground with heated bathrooms and showers.

John's dash to the Badlands, pulling his RTTC Kodiak Stealth with his Toyota Tundra pick-up, began on Friday, October 25, with the intent to drive to his son's house in 3-4 days, and he achieved that goal by arriving for dinner on Monday, October 27. He "thoroughly enjoyed the trip west but pushed too hard. That first day of 600 miles took a toll on me," so he was happy to arrive to stay with friends in western Ohio as he began his journey. "They were gracious enough to offer me an electric hookup from their pole barn so I could socialize with them inside and then sleep in my camper outside."


The next day, it rained hard all the way out to western Illinois where he stayed at "a very nice KOA," waking to "a glorious autumn cold morning." He liked the Rock Island/Quad Cities KOA so much that he also stayed there on his way back. "Superb, clean campground with awesome bathrooms and showers," it was "simply a beautiful property on a lake with nice size lots."


After departing Illinois, John started his third travel day, heading for the KOA in Mitchell, South Dakota, but upon arriving late due to construction traffic, he found the bathrooms to be torn apart, so his girlfriend located another campground (she had also located the Illinois KOA), this time a Good Sam several miles away. "It served its purpose, but the bathrooms were quite outdated. But, I was happy enough to only pay $25 cash for that night on the road." From Mitchell, John drove straight to his son's house.


Upon arriving, he wrote: "So . . . I'm finally finished with the first leg of my trip, none too soon I might add. Tomorrow I'll go out and dust off the snow . . . a new experience for our Kodiak. Thankful to have made it safely without incident, though last night when I got to the campground, the key wasn't turning the lock to unlock it. Maybe some water got frozen into it? I'm now locking the other one since I don't trust the main one. Keep your fingers crossed for warmer days so I can ride my scooter while I'm here visiting."

Spending two weeks visiting his son and family, John also did some exploring at Devils Peak in Wyoming. "Definitely one of the highlights of past visits, but an entirely different and beautiful experience after and during a snowfall."

Having also brought his scooter in the back of his pick-up, John also scootered in Spearfish Canyon, which he had also visited in past years on a motorcycle during Sturgis in 2011 and then again in 2015 on my Victory Cross Country Tour motorcycle when he and his girlfriend rode from New Jersey to visit his son and then onwards to Yellowstone National Park.


"Though I had hoped to hike in the hills, there was simply too much snow during this visit, and still recuperating from total knee replacement surgery, I didn't want to mess up my joint in a sudden fall. I did, however, enjoy a few days of walking my son's beagle and beagle/black lab mix in a beautiful large park where they could run free in the snow!"

John stayed until Monday, November 11, before departing for home, and during his two-week stay celebrated his son's birthday and also commemorated with his son and family the 20th-year of his father's passing.


"On my return trip, I stayed at another KOA at the very edge of South Dakota and Iowa, Sioux City North KOA. It was just OK, though. I imagine in summer would be very popular with its pool and other family-oriented activities. I didn't care for the showers compared to the Rock Island KOA, and it was more expensive than I cared for, $45? vs I believe $35 at the Rock Island. It served its purpose, though, and if I had to, I'd stay there on my trips back and forth in the future.

"My return home to New Jersey had an added stop at the State College KOA in Bellafonte, Pennsylvania. My biggest mistake was choosing a weekend overnight, as I paid double the normal fee due to a Penn State Football game. However, I enjoyed my stay and could easily return on my trips east, as it does cut my last day of driving down to 200 miles. I think the best driving days are the ones under 400 miles."


Dashing out west for his son's birthday, John didn't have time to stop at Badlands National Park, but took the time coming home to stop and spend time exploring and photographing the park's cold-weather beauty.


"I stayed for over three hours and left at sunset. It is so beautiful and magical when you're there at sunset. The golden light of the sun, streaming shadows and bathing the rocks in light, is simply a sight you have to behold in person, which is the reason I tried to share FB live for others to see. I and along with fewer than a dozen other folks had the entire park to ourselves. I've ridden to the Badlands by motorcycle in the past and camped on our tour west at the KOA outside the western section of the park. I can't wait to return with my girlfriend to camp there again and ride my Burgman 650 through the park.  It is the first national park that I got my Senior Pass at and among my favorite national parks so far." 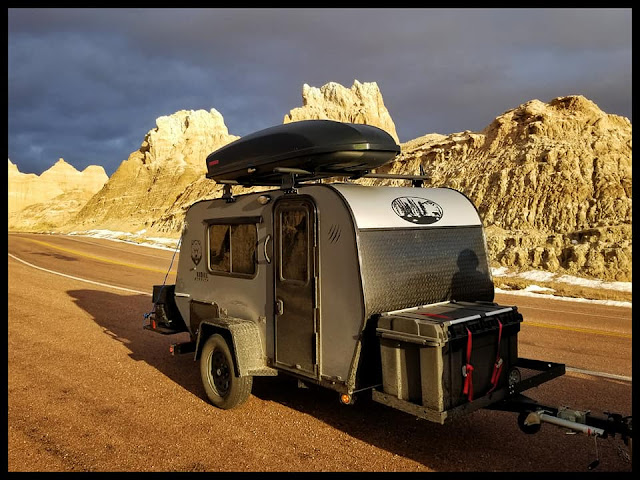 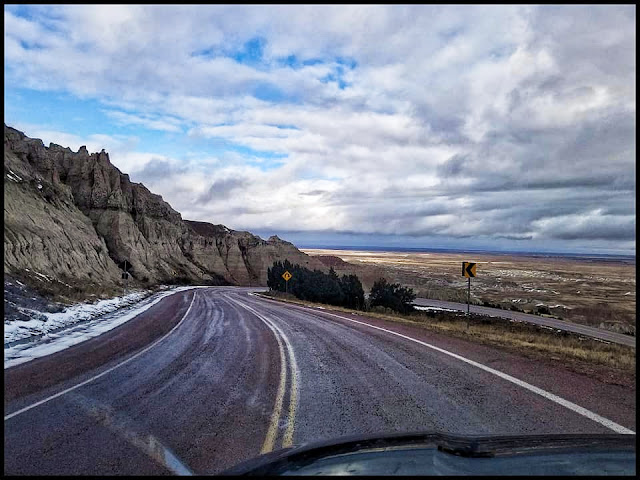 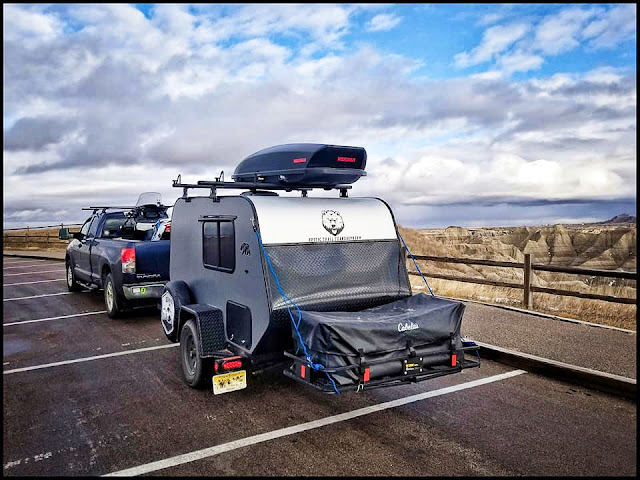 Making this cold-weather dash wasn't a such big deal for John because of his experience as a tent camper and winter backpacker. He had different sleeping bags to choose from and chose his Big Agnes 15-degree bag for sleeping, "rather than trying to make the bed every day, which we know can be a Royal PIA," but he still ended up needed to pull the covers up, which would slip down to the end of the bed during the night.

In addition to warm sleeping gear, he also used a 500-watt heater "to keep the cabin toasty during the cold and much colder mornings as I headed west." It's one thing to be cozy, and another to feel cozy, so in order to keep the cozy camping ambiance lively during his cold-weather dash, John used his Echo Dot to one of Alexa's Skills, where Magical Campfire "provides the sound of a crackling campfire, with the sounds of a thunderstorm rolling in . . . and then rain and the crackling fire continues." John would close his eyes be peacefully enjoying the camping experience as he drifted off to sleep, even when there was wind and single-digit temperatures outside.


For those of you who like technology, his refrigeration for food catches the attention. He kept his food in his Dometic CFX28 12-volt refrigerator. During the day, he plugged into his Goal Zero YETI 400 for power, and then in camp used shore power for the refrigerator. "Only once did I recharge the YETI during my entire trip west and east."

Long cold-weather treks to visit family certainly have their rewards in terms of time efficiency, but cold-weather camping and travel have both positives and drawbacks.


"The biggest thing I learned was I would prefer to take more time than rush 1,800 miles west or east. There are so many awesome places to visit, but so easily missed when you're driving on the interstates. As for cold weather, other than not eating dinners outside, now that I have just ordered a propane-powered outdoor firepit, I may spend more time outside when the temps drop into the 20s. Personally, I love that there are no bugs to swarm you or enter your camper when you're sleeping. There are also a lot fewer noises since you're not listening to your own a.c. or that of others. Autumn and winter have always been my favorite seasons for camping, and during this trip, I experienced them both.  In the future, I hope to spend more time exploring other states, but since I was camping solo, I felt I'd rather explore more when my girlfriend can accompany me. We have already planned on taking the camper out in January to share some winter camping."

I have this image of John, driving his rig through snowy terrain. It's not "dashing through the snow" with horse and sleigh, but pulling his tiny trailer on his way to visit his son and family, if that doesn't express a holiday spirit, then what does? Maybe John taking this trip again, but this time wearing a jolly red hat? I'd like a photo of that!


(Note: As the content for Green Goddess Glamping evolves, sometimes content focus will dictate that articles will be posted on some Facebook groups and not others. Articles on Dutch oven cooking, portable toilets, or bicycle day rides, for instance, could find posts in different groups. The best way to ensure that you are receiving all articles is to subscribe to follow this blog by email notifications. And if you don't get a confirmation notice, be sure to check your spam box.)