A Walk on the Quiet Side


Even with high temperatures near 60 degrees and lows above freezing, it was my wife who convinced me to hook up and take off for camping for a couple of nights. She deserves all the credit for another camping expedition this season for "Team Kepler," as she phrased it. It was a great idea, but it was Sunday, and we'd gone for an hour-long hike in our local county park, and then we'd gone out for lunch at a local Indian restaurant . . . and a couple of nights of solo camping sounded good but I was well exercised and fed and coasting into the afternoon. 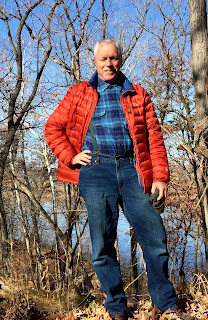 But it was a good idea, and with the Green Goddess mostly set to go, I bestirred myself, packed a few clothes, planned a few meals, and realized or remembered that a couple of nights doesn't need much. I had been considering four local campgrounds and at the last moment chose Lacey Keosauqua State Park because it was close, clean, and had water in addition to electricity. Pulling into the campground and driving to the site I had chosen, leaves covered the road in places, and the late-fall stillness and the pungent, earthy smell of the fallen leaves immediately cast a tranquil spell upon me. I was the only camper in the park, and the silence was almost palpable, the late-afternoon sunlight streaming in beams through the fall air. That lambent silence welcomed me, and I was cleansed by streams of light and rivers of silence. I was home again.

I reached camp a little tired but chose a pull-through campsite that required only a touch of leveling; therefore, I didn't unhook but just plugged in and was ready to go. Sunset came early, so dinner was leftover kitcherie, warmed on the induction burner that sat on the trailer's front aluminum box, me wearing a headlamp because darkness had already fallen. I ate the thick dahl with chunks of sourdough bread, torn from a fresh, round loaf, while sitting by the campfire. Bed was early, which was fine with me because I had a good book.

I woke up early Monday morning, and my only full day at the campground was a beautiful day, blue sky and no wind. I wanted to hike in the morning along the Des Moines River, but I had never accessed the river trail from the campground. I did know where a spur trail from the road headed out toward the river and had been told it hooked up with the river trail, though. I opted for some adventurous exploring and took off.


Walking the trail was an enjoyable experience. The funny thing about Iowa forests is that they are not massive like in some areas of the United States. They are small, protected pockets of forest amid a landscape of farmland. The same is true here at Lacey Keosauqua, so as I headed down the trail, I quickly lost sight of all things manmade; however, listening closely, I could hear the occasional whine of tires on pavement in the distance or the ripping roar of a chainsaw. Around me, though, silence predominated, broken only by the sound of my feet scuffing leaves.

The entire forest floor was a carpet of browned leaves, mostly oak, maple, and hickory. Even the trail was covered with leaves, so following the trail was not a matter of keeping to the gravel path; rather, I had to discern the pathway by the geometry of its flat grade that cut and curved among the trees and the fall-colored carpet of leaves. Even within a few hundred yards of the roadway, the forest that I walked through was owned by the trees and its animal inhabitants. Nature predominated, with humankind a distance away--even if only a short distance. It was comforting how quickly the angles and textures of civilization disappear with just a thin border of woodscape.


I meandered along, alone with only the sleeping trees and warm sunlight as my companions, and with such companions, I was happy to share the morning. The trail dropped down to the river after a near mile, and the blue water of the Des Moines flowed by, silent and powerful. The walk along the river was more flat, the trail more defined than had been the spur trail through the woods. It was easy to imagine walking such a trail in older times when the forest and meadows accompanied the river all the way to the mighty Mississippi. The town of Keosauqua was originally a river town, its commerce arriving by boat. Before that, the land belonged to times which lacked even the belching soot and steam whistles of the paddle boats.

When I came across another spur trail heading up the hill away from the river, I decided to follow it because following the river would take me a couple more miles downriver to Keosauqua. I was hoping the spur would take me to a picnic shelter area within the park near the campground, and I was right. I circled back to the campground and arrived back at camp, having hiked a little less than an hour and a half. 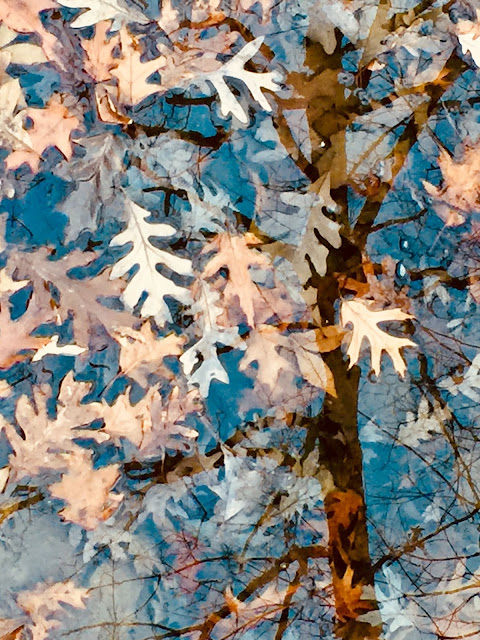 After a late lunch, I knew I could sit in camp and write and read, but the next day was my day to leave because a drop in temperature and cold rain were expected. I elected for a late afternoon walk along a portion of the lake trail below the campground, maybe just a mile. The trail was steep down to the lake area, so I walked carefully on the slippery leaves. Quickly I was surrounded by forest again, with the swampy edge of a bay of the lake below me. 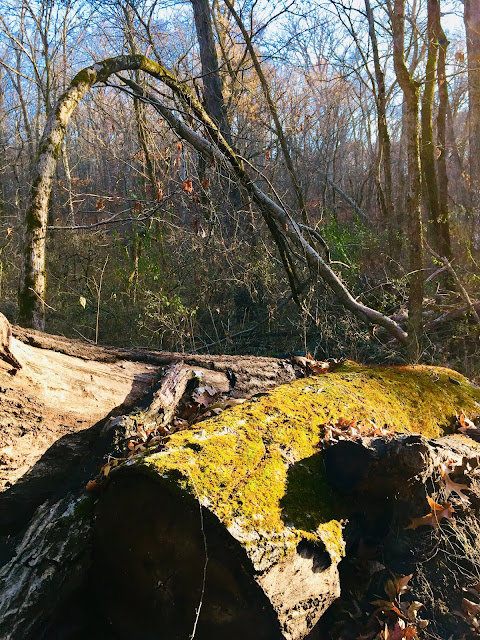 As I walked the trail, I could see signs of the park's stewardship, orange flags marking young trees: "hackberry," "autumn flame maple," and "hickory." Sections of riprap on the trail filled in washes. Even with the park's parental influence, though, a couple of small trees had already fallen in the fall winds, and I had to duck beneath branches to continue on my way. An old stone bridge arched a larger ravine, and in the distance geese honked and splashed.


Arriving at the bath house for swimmers, I turned onto the asphalt and followed the road back to the campground. Just as I arrived at the campground entrance, I saw a herd of about eight deer, with one large, antlered buck among the does. As I walked into the campground, the herd gradually moved away, but not before I was able to enjoy the sight of these healthy animals enjoying the quiet time of year for the park, as was I.

Having had a late lunch, dinner that night was a simple snack of apples and walnuts, pecans, and pumpkin seeds--along with the last bit of a piece of carrot cake. I picked up camp to prepare for my morning departure, and then went to bed early again. I was eager to finish my book!

I enjoyed my two nights of fall camping. I enjoyed my walks on the quiet side. Rain and snow are expected, with lower temperatures, but who knows? I might get out again before winter truly arrives!


(Note: As the content for Green Goddess Glamping evolves, sometimes content focus will dictate that articles will be posted on some Facebook groups and not others. Articles on Dutch oven cooking, portable toilets, or bicycle day rides, for instance, could find posts in different groups. The best way to ensure that you are receiving all articles is to subscribe to follow this blog by email notifications. And if you don't get a confirmation notice, be sure to check your spam box.)
at December 01, 2019