If GPS Routing Were Music, It Would Be the Blues 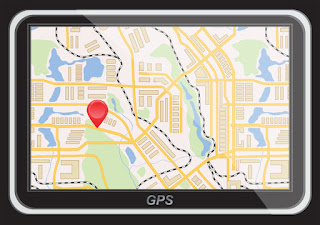 When I take to the highway,
Just want to know which way to go,
But gps don't treat me right--
too many rocks and too little roll.

Please excuse the lame lyrics, but my gps navigation has been bluesy--hardship, unrequited love, and memories of the good times we've had.

Continuing my travels toward home today, the fourth day of five, was actually pretty mundane--and that's good, because "exactly what I expected" is what I want from my gps. Today the travel was fairly light freeway the whole route, which is what I expected from my research. Here's how I planned.

Nissan provides three options: fastest route, shortest route, and energy-saving route. What happens if the route I want doesn't follow any of these courses? The car's system allows for five "waypoints," to be inserted between the starting point and destination. These waypoints can be addresses, points of interest, or can be located on the map. If the car's navigation isn't cooperating--as in my experience of both routing me through heavy urban freeway traffic or via every alley and tiniest backroad on the map--then I can provide key waypoints to clue Nissan to my preferences. However, when providing the system waypoints, then the three route preferences are no longer operational, although it is possible to add waypoints to a route that has already been set.

The bottom line is that if I want to be in control of my route, I have to take more time to manage the system. I will probably also buy a dash mount for my iPhone so that I can have it more accessible. I feel like this trip has prompted me to learn enough about gps routing that I will be more capable in determining the route I want and if the car's system is in accord with my desired route.

Today's route was easy--about 275 miles using three freeways that merged one with the other. It was the fastest route according to both Google and the car navigation (Clarion Company, LTD), so my main job was to take the time to make sure that the route was what I wanted, with no mistakes. The manual does regularly remind me to keep alert and use my common sense (and to obey traffic laws). My mistake has been to be too trusting and to accept whatever route provided as the best, which this almost-3,000 mile trip has clearly demonstrated to be naivete on my part.

I've just learned that I can call up additional icons on the map, such as gas stations or rest stops. Will the fun ever end? One thing is sure--if I want "exciting" trips, just blindly accept whatever the navigation system slaps on the screen and head on down the highway. One last story about naivete--On one bicycle trip, I headed for a campsite down a gravel road and across the river. Arriving at the river, I discovered the bridge had washed out years earlier and never been replaced, resulting in bicycling into a strong headwind for ten miles before reaching another campground. Why in the world didn't I remember any of these experiences? I suppose realizing such gps inadequacies while on a bike traveling eight miles an hour on a gravel road isn't the same as having those discoveries on a busy freeway or narrow road with a cement truck approaching . . .

I'm home now, having finished my fifth day of travel. The most interesting aspect of the last day home is that the gps on the trip out from home took me on easy freeways from home to my first overnight rest stop. On the way home from the same roadside campground, the gps routed me a somewhat different way, through a more rural route, taking the loop freeway around Peoria, Illinois, and then taking me on backroads so that I completely missed Peoria. This was great because I missed more construction and a bit of urban freeway, but it is still not clear why the different routes.

I did check on the Pathfinder's screen, and the route seemed the same. I didn't zoom in, though, on the level of detail that would take me street by street through Peoria. I suppose if I don't bother with the details, then the details will occasionally be a surprise. Using the screen on the Pathfinder--and having the car idling while checking--is still something I will have to become accustomed to and get better at.

I am home, though, and I have definitely improved my routing on this trip, especially on the trip home. I've also read in the manual that it's possible to send Google routes to my car's system, so that is another layer to add to my learning curve. For the next few excursions, though, I'll be local, so I have some time to improve my skills without experiencing unexpected and unpleasant gps surprises. Having a gps system for navigation is a great boon, especially when traveling alone. It's not perfect--at least not yet. Not bad, though. Not bad.

This is the third of three articles about gps and travel. On my way home from the Carolinas back to Iowa, I experience the highs and lows of gps navigation systems.
1. Tiny Trailer Halloween Freeway Horror Movie
2. The Green Goddess Meanders Toward Home
3. If GPS Routing Were Music, It Would Be the Blues


(Note: As the content for Green Goddess Glamping evolves, sometimes content focus will dictate that articles will be posted on some Facebook groups and not others. Articles on Dutch oven cooking, portable toilets, or bicycle day rides, for instance, could find posts in different groups. The best way to ensure that you are receiving all articles is to subscribe to follow this blog by email notifications. And if you don't get a confirmation notice, be sure to check your spam box.)