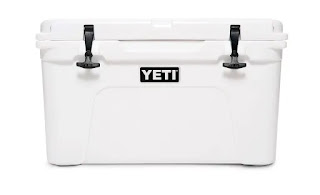 Like most folks who camp, my wife and I don't want to have to change out our ice too often when camping. An efficient food cooler is an important component of camping convenience. We've found this season that the Yeti 45-quart cooler is an excellent, "tiny trailer-sized" choice for our particular camping needs, for several reasons.

Our first choice of a Yeti was the 75-quart cooler. We were tent camping then, and it really worked well, keeping our food cold and containing enough space to meet our needs. However, we discovered that the unit was just too heavy for us to manage easily. My wife's wrists were strained when carrying it. More importantly, though, I found that it was too heavy for me to easily maneuver by myself. That especially became a problem when I camped by myself. Not only was it difficult to pick up and pack by myself, it was also ungainly getting it into the camper due to its length. Our daughter needed a large cooler for her Costco trips, so rather than selling the unit, we gave the large Yeti to her.

Then we bought two Yeti 45s and are really happy with this combination. The 45s are easier to fit into the SUV or into our tiny trailer when on the road. Although all Yetis are heavier than other coolers of comparable size, the 45s are manageable by me alone. Even the cooler we fill with all the dairy products, which is usually the heavier of our two when loaded, is fine for me to pack out of the kitchen and house, down our outside steps, and into our camper.

We need two coolers because we cook with a lot of fresh vegetables and fruits. In our last trip, the "veggie" cooler was packed with pre-washed and cut vegetables and also containers of watermelon that we had pre-cut for our trip. Between the vegetables, melon, grapes, and a couple of bottles, that fills the cooler. The second cooler is for our dairy products, macaroni and/or potato salads, and the more perishable materials.

We have a small freezer unit downstairs in our home, so I freeze plastic storage containers with lids that I bought from WalMart that are around 14 x 8 x 5 inches in size. Leaving enough room for expansion with freezing, I have a nice block of ice to add to the cooler when camping. I keep the ice in the container so that the inside stays drier. In addition, I add a few re-freezable cooler bricks, depending on the temperatures and how many groceries we have. 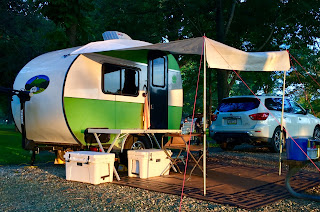 During our last trip, temperatures were in the mid-80s. We kept our coolers mostly in the shade, and after five days of camping, there was still ice--a pretty good chunk for the dairy cooler and a smaller chunk for the veggie cooler. I'm not sure about why there was a variance, whether it was because one was opened more than the other, cooler placement regarding sunlight, or variability in the two coolers. If we had been considering camping for a longer period, we would have added ice to the dairy cooler probably a day earlier. As it was, the coolers did a good job.

We've used older and less expensive coolers, and they work if the stay is for fewer days and if you're willing to buy and add ice during the camping trip. One thing I'm interested in for the fall season is how well the Yetis work when it is cold out. Last year when the camping temperatures dropped into the teens, I was using my old coolers to keep my vegetables fresh yet also as insulation at night to keep them from freezing. With my old cooler (over 35 years old), some of my vegetables were ruined by frost with only broccoli and kale getting by. I should add that we also took our old cooler once this summer with us with the Yetis, and the ice in the older cooler lasted about half the time as in the Yetis.

Yetis are expensive but seem durable. They definitely do keep cold longer than the inexpensive coolers I've bought. I think that even if someday we own a tiny trailer with a refrigerator, we will still take one Yeti along on our trips for fruits and vegetables. Considering I've owned my old metal-sided Coleman since I was in my 20s, I'm sure these Yetis will hold out for as long as I continue to camp, although I wouldn't mind living and camping long enough to wear them out!

Addendum: One of the Yetis was found to have a defective rubber gasket seal. When the lid was closed, the plastic clacked with the gasket never making a seal. I called Yeti and told them the situation. "You should never hear that sound of plastic hitting," the representative said. Even though the Yeti website lists the procedures for issues--including receipts and date of purchase--the Yeti representative just got my email and mailing address, mailed me a new gasket and emailed me a video showing how to change out the gasket, and told me to call back if the problem wasn't solved. The experience was easy, and I felt important to add to this review.

Addendum 2: Even with the new gasket, our second Yeti cooler has proven not as efficient as our first. After the new gasket was installed, the cooler worked well for a time, but then the plastic starting hitting again when opening and closing. Obviously, this particular unit has some flaw that the other unit doesn't have. It's not as efficient. When I get a chance, I'll contact Yeti and see what they say.


(Note: As the content for Green Goddess Glamping evolves, sometimes content focus will dictate that articles will be posted on some Facebook groups and not others. Articles on Dutch oven cooking, portable toilets, or bicycle day rides, for instance, could find posts in different groups. The best way to ensure that you are receiving all articles is to subscribe to follow this blog by email notifications.)