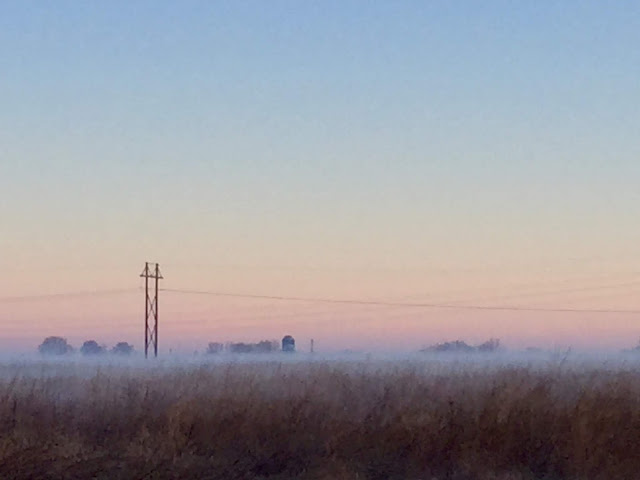 The ground fog drifted above the winter-brown native grasses at dawn. Spring had finally arrived with warmer weather, the crystalline frosts replaced with morning mists.

I just had to get a photo of that, so I grabbed my iPhone and rushed for the door. Standing outside, barefoot and in my bathrobe, I whipped up the camera, ready to snap the shot and go back inside before my neighbors saw me and started snickering: photo app, quick frame, virtual shutter button, snap . . . done. No, wait--let's be a little bit more deliberately creative.

Yes, I did grab my iPhone and rush outside, barefoot and in my bathrobe--which, to tell you the truth, was a joy in itself to experience a cool spring morning rather than a frozen winter morning. So there I was, standing out on the sidewalk, ready to for a quick jerk, snap, and finished. Then I decided to enjoy the moment, to savor the photographic moment, so I slowed down and remembered some of the points of improving my photography that I'd included in an earlier blog post, "6 Ways of Using the iPhone When Camping." And so this is how that photographic moment really played out.
I make no claims that the photo I took of a field across the road (while standing barefoot in my bathrobe) is a fabulous shot. It was a spur-of-the-moment thing, but I didn't just mindlessly point and click, my attention more on my morning cup of tea than the photographic moment. I didn't let the iPhone camera automatically make all the choices. I thought, composed, selected, and made my own choices.

It's a week later after my across-the-road photo session. Now I'm camping at Lake Sugema Campground in SE Iowa. This morning I was up and dawn and took the time to take a few photos, using some of the above techniques to hopefully improve my photos while enjoying a bit more depth in the creative process. It's after 10 A.M. now, a light drizzle outside forecast for a couple of hours, so I'm snug in my tiny trailer, finishing up this article.

I think the results of these photographic moments were two-fold: one, my enjoyment was richer and more engaged, and two, the photographs came out better because of my conscious choices. The choices I made were not highly technical. I just took a bit of control away from the camera and placed it back into my hands. I liked the experience of making artistic choices, no matter that they were achingly simple for anyone who is a real photographer. I feel more ownership of those dawn photographs fine spring mornings--more ownership of the photos and of the experience. I believe the current expression for my experience is one of more deliberate or more conscious living.

I like to sweeten my experience . . . just like I prefer to sweeten my tea. I encourage everyone to sweeten their photographic experiences. However, I leave the choice of coffee or tea--sweetened or unsweetened--up to you.