"At dusk,  a herd of bison came into the campground,  grazing."

Thus teardrop trailer owner and artist Betsy Downs begins her description of an experience which initiated her watercolor painting.


"The bison painting is from Sage Creek Campground, Badlands National Park, in South Dakota. Sage Creek is a very primitive campground in the western grasslands of the national park. At dusk, a herd of bison came into the campground, grazing. They pretty much ignored the campers, but we could not ignore them. They were huge!

"We were sitting behind our Camp-Inn teardrop, enjoying a glass of wine after dinner. The beagles were in their crate, also relaxing after dinner. When the bison wandered by, really close to us, our little beagle girl decided they didn't belong in our campsite and tried to chase them away with her loud barks and baying aroooo's. We couldn't get her to quiet down. The nearest bison looked right at her and pawed the ground. We were afraid he would charge us. Can you imagine the damage a two thousand pound bison could do to a teardrop?

"But he didn't charge. He snorted a few times,  then trotted through our campsite within feet of us, and kept his distance as he resumed grazing aways off. And that's how a twenty pound beagle with a big voice chased away a 2000 pound bison and saved our camper.

"We brought out grandson back to the same campsite two years later, and the bison again came into the camp area to graze. This time, no encounter with our beagle, though!"

Betsy and her husband, Roger Menning, own a Camp-Inn 560 Raindrop, a 10-foot long teardrop model. The story of how they got it is beautiful, although poignant.


"My mother died eight years ago and left me some money. I wanted to do something special with it, in memory of her, but didn't know what. On a very cold late-fall tent camping trip at Sleeping Bear Dunes in Michigan, it came to me. We should get a small camper with my inheritance. We researched campers and selected the Camp-Inn 560 Ultra teardrop. I thought the traditional shape was much cuter, but since my husband is over six feet tall, we decided on the Raindrop for the extra two feet in length. We've been very happy with it.

"We named our camper Dorothy, after my mother. She had been a free spirit and a trailblazing soul. In WWII, she was a WASP; that's a Women's Air Force Service pilot. Walt Disney designed a logo for the WASP, based on Fifinella, a gremlin. I had a decal made for our teardrop with the name Dorothy, and the Fifinella gremlin."

Betsy Downs is a retired architect from the Chicago area. After she retired, she began watercolor painting, taking classes with Ed Hinkley at his studio in Chicago. She paints for her enjoyment, the teardrop watercolors some of her first. "I have taken my paints on camping trips,  but there never seems time for painting when camping with a family. So I do my painting in our house."


The Downs-Mennings board their dogs now when they go camping because of the dogs' age, and now have the opportunity to take their grandson camping with them. They usually try to get in two or three one-week camping trips a year, "plus several long weekends. We've taken the teardrop west to Colorado, east to Vermont, north to Michigan's Upper Peninsula, and south to southern Indiana. Whenever possible, we stay in national parks."

This watercolor is of the Betsy and Roger's camping in Ottawa National Forest, on the shore of Lake Superior in October. Betsy described her experience: "It was crisp during the day, but cold and windy at night. During the day, we took several long hikes with the beagles, exploring many waterfalls and discovering an abandoned ski flying structure that was actually taller than the Olympic ski jump. Our three beagles kept us warm when we slept in the camper. We put the sides on our canopy and huddled inside with coals from the grill and the beagles. I think it got down below 30. Mainly, it was a relaxing trip. No dramatic adventures. And yes, the colors were amazing!" 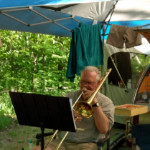 Camping--and I think this is especially true if one camps a lot--goes beyond the basics of camp set-up, cooking, and resting. Sooner or later, we incorporate our most cherished activities and interests by bringing our "home" interests to the camp or by developing new interests to engage in while camping. For instance, I write and read at home, and when camping I bring along materials so that I can engage in those pursuits while out and about. In Betsy's family, it is her husband Roger who incorporates his passions into his camping life. As Betsy describes the situation, "He is a jazz musician, and he brings his trombone sometimes on camping trips."

Betsy has tried painting while camping, but she's found it difficult to find the time--especially when her grandson is with them. Too much adventure awaits! She has found a way to bring her camping experiences home with her by taking photographs and scenes of nature and creating original art from them, watercolors that tickle the memory and imagination. And I bet that someday she will have the time and opportunity to paint en plein air, painting outdoors, beyond the studio--just the artist's eye, the brush, and the incredible palette of the colors of nature! Who knows what beauty Betsy will perceive and create in the next year? Can't wait to find out!


(To read all the Green Goddess Glamping art and craft articles, check out the Art and Craft Activities label URL, which aggregates all similar posts.)