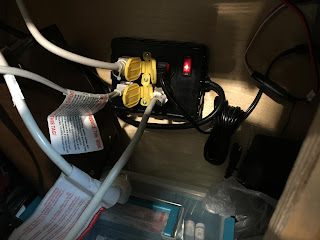 It was a hot summer weekend over fifteen years ago, and I was busy taking care of my disabled wife and catching up on the weekend chores. The air conditioner was running, as were the dishwasher, washer, and television. I had fresh bread baking in the oven. Heading down the stairs to the old basement of our eighty-year-old home, I smelled an electrical burning odor, and checking the fuse box, I saw the old style fuses glowing with heat. I had overloaded the circuits and was close to catching the house on fire.

Why hadn't I considered that the old wiring and fuse box were not set up for modern appliance loads? Why hadn't I asked myself how many watts that big window AC unit pulled? I switched off all the appliances except the oven. I had saved the house yet realized I had to contact an electrician to modernize our central electrical system. My attention had been on weekend chores, and I'd just never considered the realities of overloading the house's electrical system. Naive and dangerous.

We certainly don't want to overload our tiny trailers' systems when we are out for a fun weekend at a local campground. Doing some simple math (as in addition) can save us the misery and stress of putting out a fire in our trailer or on our cooking table.

My tiny trailer is an RTTC Polar Bear. The central connect from the trailer to anything plugged in is an Utilitech 4-junction box and cord, rated for 20 amps. The system has built-in overload protection. At 120 volts the 20 amp system equals 2,400 watts. You can only load up to 80% of the capacity, so we're talking not plugging in more than 1,920 watts. However, the top power strip is rated at 1,800 watts, of which 80% equals 1,440 watts.

Therefore, I don't plug in appliances that will pull more than 1,920 watts into the lower power strip. We also have to consider the extension cord that runs from the campground electrical mast to the camper. What is its capacity? My current cord is rated for 1875 watts. Finally, this winter I've unplugged the air conditioner at the Utilitech outlet box, giving me another plug-in to use at that primary interface, rather than using the outlet strip that is above the cabinet (and piggy-backed into the primary junction). 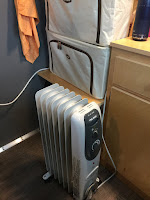 Here are the common appliances I use and the watts they pull:

Just a bit of simple math reveals how living in my tiny trailer entails, mostly, not running any two appliances at once. The numbers explain why I once tripped the camper's circuit breaker when I had the heater on the second setting (900 watts) and turned on the teapot. It also explains why when I was cooking outside once (using a second circuit from the campground mast), my extension cord got too hot when I had the induction burner and the toaster oven on at the same time (baking and steaming vegetables). The only variable wattage appliances are the space heater and the induction burner. 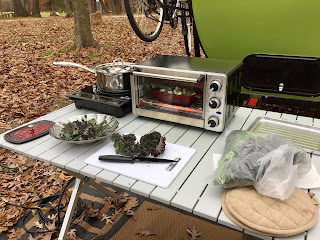 With my tiny trailer's system, the only two appliances I can really use at once are the oil heater on low and the Instapot, both adding up to 1,300 watts. I could use the toaster oven and induction burner if I were just simmering on a low temperature with the burner. I'd have to refer to the manual, though, to determine just what setting would deliver the lower wattage. The Instapot and mid-heat Duxtop would be okay.

When camping, thinking about what is on the menu to be cooked has to include thinking and checking how much electricity I'll need to do the job. I have to plan sequencing my cooking. For instance, I can bake in the toaster oven, leave the food in the warm oven (now turned off), and then use the induction burner on a high setting to steam vegetables or boil pasta. In the mornings when heating tea water with the Cuisinart, we turn off the space heater for the few minutes it takes the induction teapot to boil water. Then after the teapot clicks off, we turn the heater back on. It's the camping dance of the electrons. One last possibility I use outside if it's not to windy is to use my 40-year-old Coleman propane gas stove--call it Old Reliable!

I believe now I've established the parameters for electrical use with the Green Goddess. I'm a slow learner, but I do learn and haven't torched my rig. My son-in-law tells me to just use my equipment, and if a breaker pops, then I know what the limits of the system are. I get what he's saying but personally prefer to proceed using caution and math.

I don't mind being branded as cautious. After all, I've been known to wear suspenders and a belt--the classic definition of a cautious man.

Email ThisBlogThis!Share to TwitterShare to FacebookShare to Pinterest
Labels: Gearing up