Bentonsport is an old town in southeast Iowa, an old river town that was once a hub of river commerce and that is now a hamlet where folks live quietly and tourists--and campers--visit.


Bentonsport Campground is right on the river, flowing water on one side and now, in early November, the campground is a yellow, umber, and scarlet carpet of fall leaves. The rich smell of leaf mulch is a fragrance that permeates the environment, just wonderful, the lush river and forest smells. 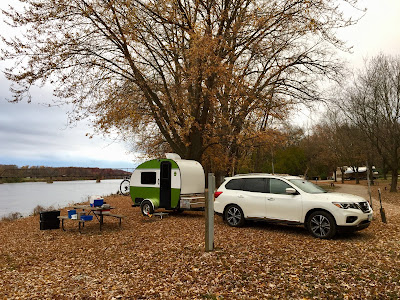 When I arrived, the water rippled with shades of grey, reflecting the colors of the sky, for it rained off and on during my stay in my tiny trailer. I didn't even unhitch because the trailer was perfectly level on the gravel pad next to the water, the head of the bed just a touch raised. I was planning on continuing my way in three days, anyway, to Indian Lake at Farmington, eleven miles away. The county planned to shut off the water in three days, along with the flush toilets at a shelter in the park about a tenth of a mile away. The Indian Lake campground was booked pretty full anyway for the weekend. At Bentonsport, the only campers were the hosts and one cold, wet, and miserable guy in a tent who was an instructor for a weekend chainsaw class for beginners--and the class was not in the campground! Yay, although I did have earplugs.

I arrived on Friday at about noon, set-up camp, and then took a walk. Set-up was minimal because rain was forecast, therefore, no awning or table set-up. I just got the trailer ready and set out materials on the campground picnic table that wouldn't blow away with the wind. Then I took a walk, exploring the area outside the campground. I've camped here before, twice, both times while bicycle touring. I walked a mile down Hawk Drive along the Des Moines River, beautiful riverfront with trees with brilliant foliage and stark white trunks mixed with evergreens, framed top and bottom by the cloudy sky and flowing river. Returning to camp, I also explored the city park and the old Bentonsport bridge, which is now closed to all traffic except bicyclists and pedestrians.


An amusing anecdote to share (detailed on my bicycle blog) is that the first time I camped here, I headed out the next morning to follow Hawk Drive to a couple of other gravel roads that would lead me to Highway 1 and then home. Hawk Drive followed the river and narrowed until finally ending in overgrowth. Obviously the road was not continuously maintained. I checked Google Maps (that had suggested this route) using the satellite mode, and saw that the road was not maintained for about two miles. So I had a choice--add about twelve miles to my trip home or beat my way through the two miles of neglected gravel road. I could see where the road continued; it had been explored by 4WD vehicles that season. I decided to go for it, pushing the bike for most of the way, forging my way through tall weeds, sometimes the trees and brush curving over me to form a canopy, scaring up a few deer, and miraculously coming out to a small abandoned bridge over a stream (probably the reason why the road wasn't maintained--not enough traffic to justify a new bridge), and onto maintained gravel where a man was tending grape vines in his backyard.

He looked at me, startled. "Google said this road goes through!" I exclaimed. "Took ya out into the wilderness, hey?" he said. I agreed, and now have a fun experience to relate, although the ramble had me wondering a time or two.

Coming back to camp, I followed what appeared to be a river trail until I came to a secluded river cabin and a big red stop sign, beneath it another sign that said "Beware of Dog." I decided discretion is the better part of valor and returned to camp to bake veggies and feta for dinner.

The next morning, I mixed in the leftover veggies and feta with scrambled eggs for a big breakfast, so I decided to take another walk. Up away from the campground and across Highway J40 was a sign for the Bentonsport Nature Trail, up the hill steeply, climbing out of the river basin. I followed it, a nice walk through forest up the hill and then onto a trail of mixed prairie and forest for about a mile. Taking a fork that would return to camp, I met up with the chainsaw class. For their practice, they were clearing invasive species of trees from the county land so that native species could re-establish themselves. They all stopped their buzzing when I met them on the trail, everyone wearing their heavy bright yellow and orange safety gear and hardhats, saws in hand. "Some guy walkin' the trail," one of the anonymous, colorful figures said, and I was led through the cut zone and continued on my way. There was some point in this interchange when I joked (to myself) that I was glad I'd never watched any of those chainsaw massacre movies!


The fall forest smells were especially inviting, what with the falling leaves, the rain showers, and the fresh smell of sawdust. The poison ivy was also a beautiful, luminous red--and fairly abundant; however, I was able to contain my enthusiasm and stay out of it. The total trail walk was about two and a half miles, estimating from the signage along the way. When I had passed through Bentonsport on bicycle, I had completely missed the trail and some of the beauty of the Bentonsport area. I'm glad I've stayed there longer and am now more familiar with the area.

It started to rain, so I was inside more, learning how to cook in my tiny trailer. This time for lunch I had steamed vegetables and potato salad, for dinner a toasted bagel with cream cheese and homemade black raspberry jam. I read, wrote, watched the Matt Damon movie The Martian on my cellphone, and then went to bed. It rained hard, and I realized about midnight, waking up, that this would be a good time to see if I had successfully caulked that leak in my cargo hatch. I was able to pull a few stored items out from beneath the bed, wiggled under with a flashlight, and checked. The hatch wasn't leaking, but there was still a small seep in the lower right hand corner of the trailer.

It was at this point that I decided that, come the next morning (and the shift to standard time), I would head home to do some more caulking before heading out again. The next morning camp breakdown was swift, since I was already hooked up and had stored items out of the rain. I loaded just three boxes and my dishwashing buckets and headed out, listening to the Chieftains' Nashville Sessions CD.


It was an easy drive home, and after talking to my son-in-law, who is a builder, I have a clear idea of how to caulk my trailer. Tomorrow has promised to be windy and dry. Then the day after I can head out to camp at Indian Lake, challenging myself to my first camping when the weather drops to a range of highs in the 30's to lows in the teens. The trailer so far has done well in the twenties as far as temperatures go; in fact, my biggest sleep issue has been getting too warm, not too cold!

It sounds like I might have another adventure to relate, as soon as I finish my trailer touch-up, wash and pack all my thermal underwear, and head on down the road.