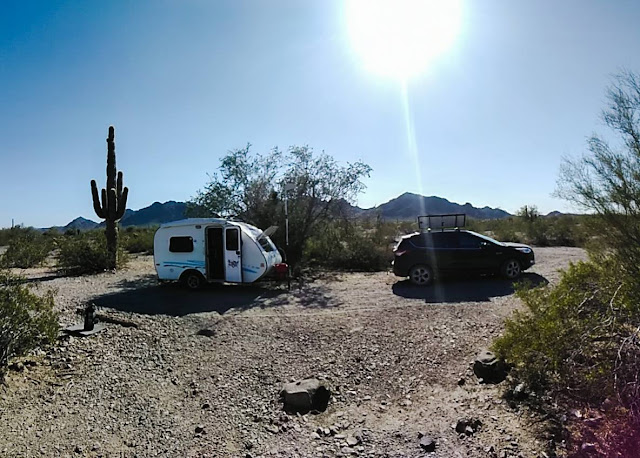 After forty-eight years of marriage, Mark and Irene Busha’s travel itinerary is to do what they like and like what they do. They’ve camped together, traveled to Europe together, camped alone, and traveled to Europe alone. Ah, the comfort and stability of a lifelong relationship! Southeast Michigan is their home, but the world is their backyard.

Irene and Mark have been camping for almost all of their years of marriage, in tents and in a number of small trailers. Their largest trailer was from about thirty years ago, a Sunline 16-footer. In 2014 they owned a 4’ x 8’ square-drop trailer, but “found it a bit tight for long trips.” Their current travels are often long and diverse. Mark says, “I travel by myself about half the time. In late winter and the spring of '17, I circled the states for four months. Last season, Irene and I traveled across the bottom of the country for several months, also attending the RTR. This year I'll travel alone, and she may fly out and meet me once I start up the West Coast.” 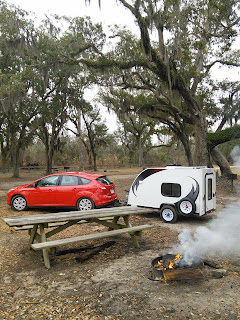 The Bushas have traveled the U.S. for long periods of time, crossing the nation and touring its different regions several times. “As we travel for long periods, we cover lots of different terrains. I think the variety is my favorite thing.” Mark confides that “Irene absolutely hates the desert, the Southwest and particularly Quartzsite. She's a Michigan girl,” which, of course, could be a one reason she’s flying to Europe this year until Mark reaches the Pacific coast. “While she is a trooper, I could tell she was not so happy about [the desert].”

The Bushas’ current camping trailer is a Prolite Cool 13-foot, a 2014 model “that sat, unloved, on the dealer lot for a couple years.” They purchased it in May of 2016, choosing the tiny trailer because it was the lightest trailer they could find, at 660 pounds of dry weight. Mark guesstimates that it’s maybe 1,500 pounds on the road now, with the modifications he’s made and fully loaded. Their criteria for purchase included “a full-time bed, separate dinette and inside cooking. No other 13' we saw offered that.” 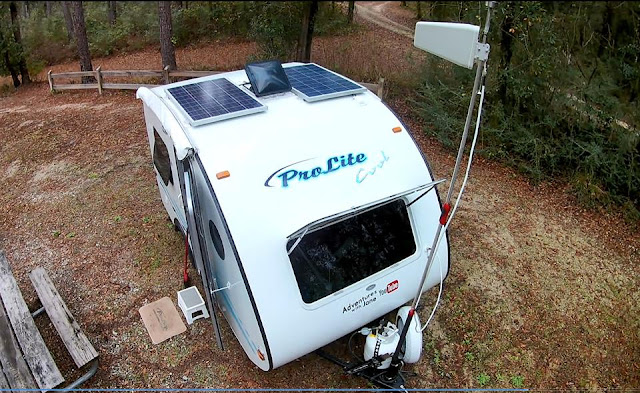 Their tow vehicle for a time was originally a 2010 Ford Ranger 2WD pickup with a 1,548 tow capacity. It got “decent mileage” at 18 to 20 mpg but was “a bit weak for any mountains or worst yet, headwinds.” Now Mark and Irene are much happier with their 2014 Ford Escape, with a 2.0 engine with ecoBoost and 4WD. “We actually own two of these Escapes, his and hers. These have plenty of power although the mileage is worst at 15 to 17 MPG. The only real concern is its small gas tank. That and the mileage limits the range a bit. We added a 5 gallon Jerry can to the trailer tongue, we'll see how that does. Otherwise, we’re extremely happy with the Escape.”

Mark describes the Prolite when they bought it as a “blank slate,” but he’s modified the bares bones of that tiny trailer quite a lot. A “bare bones” Cool was unusual for the manufacturer, says Mark, “but it really worked for us, as I had particular ideas. Also, a workshop.” Here’s a list of his mods: 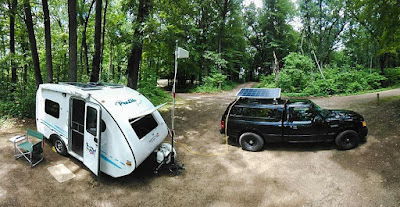 Since the summer of 2016, the Bushas and their Prolite have logged just shy of 30,000 miles, visiting thirty-three states, their time on the road around ten months. Although they spend some time in more developed campgrounds, a lot of the time is off the grid. “Once in a great while, it will be on an electrical hookup, but that’s rare. I don't carry a hose, just fill the little 10-gallon tank with a water jug. Sometimes we stay in a primitive National, State, Army Corps of Engineers (COE) or Wildlife Management Area (WMA) campground, especially if it’s inexpensive or free. National primitive campgrounds are a good deal with my half off Senior Pass. Most of the time we are boondocking, particularly anywhere west of the Mississippi. In the winter of ‘17/’18, we spent $90 on camp fees in three months. We like the space and quiet.”

Mark Busha is the administrator of the Facebook group “Teardrop Camper Adventures.” Even with all his experience, he maintains a balanced attitude about learning how to enjoy the tiny trailer camping life: “While fun to read, don't take to heart the experts on FaceBook! :-)” Learn, enjoy . . . and dream? Well, he also says, that being almost seventy years old, the Jessie Ventura quote is pertinent: “I ain't got time to dream!” You don’t have to dream about Mark and Irene’s adventures. You can follow them on YouTube on Mark’s travel channel, Adventures with Jane.


As of this October 2018 posting, Mark and the Prolite are already off on a new adventure of the American West for six months or more. “Fourth trip around the country with the ProLite. Irene is staying home and opting for a European vacation instead. With an internet connection, we talk every day. Actually seems to work out really well.” And may they meet up on the Pacific coast to share a sunset, just like in the Hollywood movies.