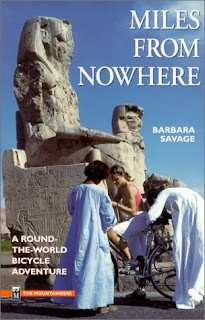 Miles from Nowhere, by Barbara Savage is one of the greatest bicycle travel journals or travelogues ever written.

Published by The Mountaineers, a non-profit outdoor activity and conservation club founded in 1906, every year the organization, in cooperation with Larry Savage, awards The Barbara Savage/Miles from Nowhere Memorial Award to "an unpublished nonfiction manuscript that presents a compelling account of a personal journey of discovery undertaken in an outdoor arena."

Beginning as no-nothing bicycle travelers and challenging the hills, winds, and rains of the American Pacific coastline, Barbara Savage and her husband Larry continue on through the Yukon and across and down the United States to Florida. Then it's on to Europe, Morocco, Egypt, and on around the world.

Here is an excerpt where they link up in the British Isles--a safe and clean ride except for the rain--with a friend from southern California who rides with them for a time:


"Tough! You folks 'er real tough. I'm dyin', and ya'll 'er goin' a mile a minute. They'll never believe this back in good 'ole Paso Robles," Cary chucked in his country drawl. "I thought the rough part o' yer undertakin' would be gettin' used ta pedalin' long distances. Heck, that's only a fraction of it! You've gotta get used ta bugs in yer food and campin' in animal manure and shoppin' fer food three times 'er more a day. An' then at the end o' the day, when yer tired and hungry, you've gotta search fer a good campin' spot and cook up yer dinner on that little stove before ya kin eat. And then you've still gotta wash the dishes before ya kin go ta bed, and lotsa times y go ta bed dirty. And besides all that, ya hafta bicycle in the rain and git all wet and miserable. Now that's what I call tough!"

All the experiences of this bicycle trek are told with Barbara's riveting prose style, with a great attention to detail that does not slow the rapid pace of the story. Although I don't use the term much, I can definitely state that this book is a real page-turner.

Here is The Mountaineers' description of the book:


This is the story of Barbara and Larry Savage's sometimes dangerous, often zany, but ultimately rewarding 23,000 miles global bicycle odyssey, which took them through 25 countries in two years. Miles From Nowhere is an adventure not to be missed!

Online reviewer Renee Sproles commented:  "Enduring physical and mental hardships as well as relishing the pleasures of creation and human kindness, Barbara Savage sparked in me a yearning to break free of my daily routine and reach out to others however I can." She titled her review "a wake-up call from your daily routine."

This book awakens the adventure in us and enlivens our humanity. It provides us a wider picture of the world, expanding our sense of what it means to be part of the family of humankind. It increases our appreciation of our luck of living a life of privilege, compared to many in the world.

Read the book; get on your bike and ride. Remember that the tour bus doesn't really capture the reality of the land you're touring. On a bike, you are immersed in the world, surrounded by it--as heady and as scary an experience as learning to swim. Miles from Nowhere is an out-of-the-bathtub-and-into-the-ocean experience. Certainly invigorating, often chilling, but absolutely unforgettable.

(Note: As the content for Green Goddess Glamping evolves, sometimes content focus will dictate that articles will be posted on some Facebook groups and not others. Articles on Dutch oven cooking, portable toilets, or bicycle day rides, for instance, could find posts in different groups. The best way to ensure that you are receiving all articles is to subscribe to follow this blog by email notifications. And if you don't get a confirmation notice, be sure to check your spam box.)